You would be hard pressed to beat Alice Sharpe for a Durham through-and-through education. She attended W. G. Pearson Elementary and Whitted School, then Hillside High School.  After that, Duke University for undergraduate, and North Carolina Central University for graduate school.

Her father was a small businessman who owned jukeboxes and coin-operated cigarette machines. Her mother was a nurse at a then-segregated Duke Hospital.

“The majority of my experiences were within my community,” Alice says. “Black-owned businesses. My dad made a good living.” But she and her friends only occasionally went downtown; they would have been made to stand, not allowed to sit, at the counter at Woolworth’s and Kress’s.

It might’ve been five miles from her home on Janet Street to Duke University, but to young Alice, it was “the other side of the world.” Her mother was adamant that she stay in Durham, despite applying to Howard University and Spelman College, in addition to Duke and N.C. Central.

Alice left Durham in ’71 after graduating from Duke. After an odyssey that included Atlanta, Tampa and New Orleans, among other stops, she moved back in ’89. She’s one of downtown’s original residents and hasn’t had a commute farther than three-quarters of a mile since.

First, she lived above what is now Dolly’s Vintage on Main Street for $600 a month. It was a huge space with plentiful and large windows. Later, she moved to Parrish Street because the Corcoran Street parking garage experienced frequent violent crime.

Alice says she called the non-emergency line for the police just about every weekend. She says it was the “wild, wild west.” The hair salons of that era would convert into clubs at night. People would sometimes block off the end of Parrish Street to traffic they didn’t approve.

“We owe the City of Durham’s firemen and women a debt of gratitude for preserving many structures downtown,” she says. Alice once watched firefighters ascend into billowing black smoke on Parrish Street in a fire that could have wiped out blocks, and which did destroy the former downtown home of The Palace International. There was also a huge fire on Rigsbee Street.

When Alice first saw The Eleanor on Rigsbee, the building where she lives now, it was just walls and a gutted basement that was slated to be the garage. Still, she said, “Sign me up.” Her friends thought she was crazy.

Today, the view from the rooftop terrace is gorgeous. She credits Bill Kalkhof, formerly of Downtown Durham Inc., for making Durham take a hard look at downtown. He saw “the value, the relevance,” she says. “You can’t have a city when your heart is dead.”

A generation later, she says downtown’s heart is beating strong. “People like Jesica Averhart [the executive director of Leadership Triangle], Tobias Rose [principal and creative director at Kompleks Creative], Carl Webb [of Forty/AM] and Adam Klein [of Capitol Broadcasting Company] are restoring the legacy and reviving entrepreneurial spirit.” She also pointed to Duke as a crucial partner in Durham’s revitalization and growth.

When it comes to downtown’s future, Alice says, “I hope we realize we don’t have to accept everything now. We can be a little pickier. … We have a great inventory of old buildings, [too].”

Good advice from Alice, now a real estate agent with Berkshire Hathaway HomeServices. But there are no plans of moving out of downtown in her future, that much is certain.

Rodney Derrick moved downtown in 2011 on the same weekend The New York Times put Durham in its Travel section as one of the 41 places, worldwide, its readers should visit. (Shocking recognition for our city at the time.) He had been living in the Colonial Village at Deerfield apartments off of Constitution Drive in Duke Forest. For Rodney, an avid runner, one of the draws of moving downtown was the American Tobacco Trail.

Today, Rodney often hosts cultural events and fundraisers at his art-filled residence in the Baldwin Lofts. In the last seven years, he has hosted parties for the American Dance Festival and the Durham Arts Council, for documentary films, local dancers and individual artists, from poets to photographers. This year he’s hosting one of Durham Central Park’s fundraising soirees.

During the era when commerce was reviving downtown, Rodney supported many Kickstarter campaigns financially, avidly, vocally: Organic Transit, The Parlour, Cocoa Cinnamon, The Pinhook and more.

He’s been there as downtown has transformed. From Baldwin Lofts, Rodney says, there were always great views and sunsets, and, after dark, the ballpark with its fireworks, even when downtown was emptier. It was city living though. With numerous trains and 3 a.m. trash trucks, he says it was never quiet.

As parking has grown more difficult and costly, Rodney gave up his car two years ago. He still makes it to every Third Friday art walk, favoring walking-distance galleries like Pleiades Arts and the Durham Arts Guild’s Suntrust Gallery on Morris Street. Rodney notes a delightful new addition to Third Friday has been the speaker series hosted by Vert & Vogue.

A longtime Labor organizer and activist, he rejects the NIMBY label. He says gentrification is a far bigger problem in the neighborhoods around downtown, singling out Cleveland-Holloway.

On the plus side, he notes that Downtown Durham Inc. says there are more black-owned businesses in downtown than there have ever been previously.

As an established downtown resident, he was part of the push (along with Marcia McNally and Nnenna Freelon) to rename Mangum Street’s Chicken Bone Park to Black Wall Street Gardens, recognizing the area’s socio-historic significance.

“Is [Durham] going to maintain its character?” he questions. “Do we want to be another Charlotte? A mini-Atlanta? Or can we preserve the historic south side of Main Street? [It is] Durham’s back porch.”

For Rodney’s part, he has has no intention of leaving downtown, nor sitting on the sidelines while the decisions are made.

Toni Mason never thought she would live here when she bought the building to house her interior design firm at the corner of Parrish and Orange streets in 1998. Downtown was empty. Durham was a “Monday through Friday affair; after 5 p.m., it was a ghost town,” she says.

Though she worked late, she never felt unsafe. Parking was right next door in the Orange Street deck.

In 2001, Toni closed her firm. For some years she ran the Durham Academy middle school’s after-school program. 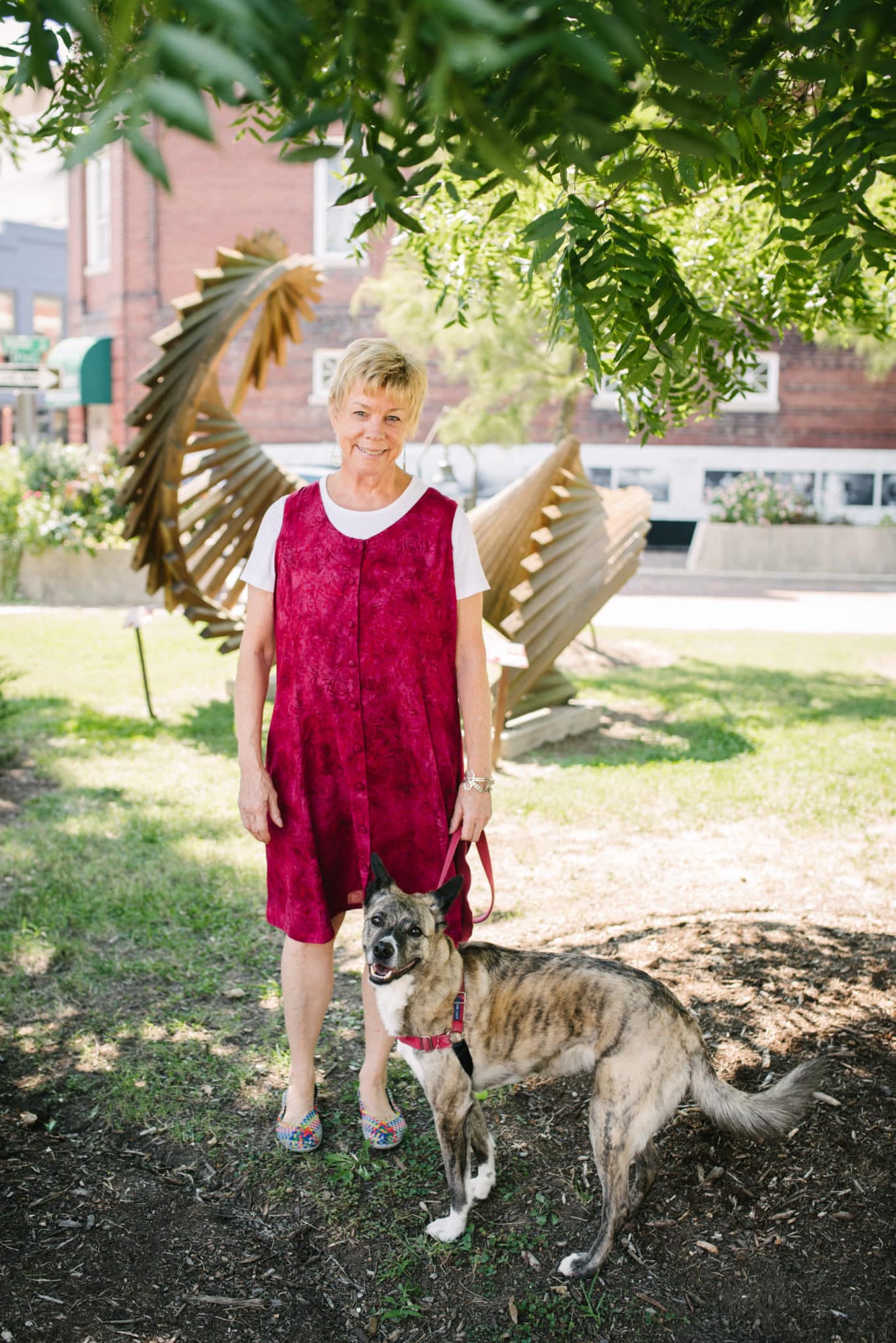 Eventually she grew tired of commuting from Chapel Hill, where she had been living, and in 2004 she moved to Parrish Street when almost no one was living inside the downtown loop. She loved it. There was a certain freedom in the neglect. In the early 2000s, the planters at the top of Orange Street were overgrown and abandoned. Seeing a need, Toni watered, weeded and dug. In that era, she used to schlep five-gallon buckets of water from inside the building to water her budding garden.

After a few years, she added a hose bibb at the back of the building, in the alley next to what became Scratch Bakery.

Today, those planters are thriving. Toni plants and maintains them. Her flowers are blooming for our enjoyment. She waves her arm at the trees, the sculpture and the FENCE art installation adjacent and says, “None of this was here. Just the bus stop. The parking lot. And crabgrass.”

Toni opened Sew Crafty, a teaching sewing studio, in the building. Her primary client base is 7- to 12-year-old girls. She believes it’s important for young people to experience making a tangible product with their own hands.

As she built her sewing business, restaurants opened around her building. Ever an entrepreneur, Toni sensed an opportunity and created the Fun Zone, a kid-sitting service in a room filled with toys and activities. Only open on Fridays and Saturdays from 6 p.m. to 9 p.m., it was a hit with parents. She added birthdays and special occasions. Parents spoke in reverent and grateful tones for years.

Word of mouth boomed. So did the town around her. Now in semi-retirement, she’s closed the Fun Zone, but downtown has continued to inspire Toni. “I love it,” she says. “I just love it. I appreciate it every day. I love seeing all the people walking by.

“I couldn’t afford to live here now if I hadn’t bought the building when I did. I couldn’t buy it now. Or even rent here. I hope that Durham doesn’t get too shiny.”

An old and dear friend now lives in the only other apartment in Toni’s building. They share a landing. “As a kid, I used to pretend I lived upstairs from my own store,” Toni says. “[Now] I would like to live here until I can’t walk upstairs.”

In June 2007, after two years of looking everywhere from Broad Street to the American Tobacco Campus, Jennings Parker Brody took over the old Fowler’s location on Duke Street, across from the closed and abandoned Chesterfield Building.

Jennings had been turned down by four banks before downtown institution Self-Help Credit Union came through with a loan. She also put tens of thousands of dollars on her own credit cards. Parker and Otis – the latter part named for her beloved pug – was born.

It was gigantic. More than 8,000 square feet. Jennings had realized beforehand that she couldn’t afford a location that needed a huge up-fit. This location didn’t. But she still had her doubts.

She remembers being at Tyler’s Taproom. It had only just opened its Durham location, and Jennings was a friend and a fan of their Carrboro speakeasy. (She managed Foster’s Market in Chapel Hill in the early 2000s.) Sitting in Durham’s Tyler’s, surrounded by pool tables, Jennings recalls saying to her friends Daniel Kulenic and Lauren Erickson, “I can’t rent 8,100 square feet. It’s ridiculous.”

But by the next day she had come back to, “I got this.” She’s been swinging between those two extremes ever since.

Today, she and her 6-year old daughter, Miller, love walking the streets of downtown. Jennings says Parrish Street is her favorite, for “its entrepreneurial history [as] Black Wall Street. It just feels right.”

The names of the other Parrish Street small businesses roll off her tongue: Empower Dance, Loaf, The Atomic Fern.

Parrish Street is home to her other stores, Chet Miller and, for now, children’s store Tiny, which is moving to the space formerly occupied by Cozy on the corner of Ninth Street and Markham Avenue. Jennings says she’s thrilled to be joining another small business corridor. She names Vaguely Reminiscent and The Regulator Bookshop among the long-term, locally owned stores. She notes that Cozy was a locally owned business for its 18-year run.

She won’t miss the disruptions in power, water and Internet that have plagued Parrish Street during this recent construction boom.

Still, being downtown has its perks. “After dark, American Tobacco is a playground,” Jennings says. “Miller loves it. Lights. A river. A grass field. The Lucky Strike Tower.” Sometimes they walk over to DPAC, and Miller rolls down the grass hill in front of the Aloft. It’s a 6-year old’s urban wonderland.

She and Miller also enjoy popping over from The Parlour to see “Aunt” Kelli and “Uncle” Billy Cotter at Dashi. Or over to Pie Pushers for slices with Mike Hacker and Becky Cascio. Sometimes Miller requests they walk to the top of the Chapel Hill Street Parking Garage, and they’ll look down at Rue Cler, the post office and The Durham Hotel. The glow of the lights. The bustle of the street. A sea of change for our city.