At Lakewood Elementary School, elected officials and school staff gathered this fall to hear the latest test results from Durham Public Schools. Superintendent Pascal Mubenga stood at the lectern and announced that the number of F-graded schools in Durham had dropped from six to one, while the number of A or B-graded schools had grown to 11 from eight. In 2020, Mubenga promised, there would be no F schools. The crowd cheered.

He then handed the microphone to Lakewood Principal James Hopkins, who said that this year the school had jumped from an F to a C. Hopkins congratulated the teachers and students, and he thanked a long list of families and businesses that supported the school.

The progress was possible, Hopkins said in an interview, because those families and businesses helped pay for tutoring programs, bus transportation and a positive behavior program, while, every day, Duke students volunteered as tutors. The community lined up behind Lakewood, a school that in 2017 was at risk of being handed over to a charter school by the state.

The reputation of Durham’s school system has long cast a shadow over the city’s sustained rise, pushing some parents toward charter and private schools, and potentially siphoning employees from companies seeking to hire talent. Lakewood’s drastic improvement, however, serves as both a model for other schools and businesses, and as an early result of plans DPS has already put in place. In January, Mubenga released a five-year strategic plan to change the system’s reputation, a plan that relies on a strong partnership at the school, parent and teacher level, and on a larger community engagement, especially with business leaders. School officials and business leaders express optimism about the district, in large part because they agree they depend on each other.

Mubenga, a former DPS math teacher at Chewning Middle School in the late ’90s, returned to the system two years ago knowing it faced significant challenges. The district has a total proficiency rate of 49%, and a 40-percentage point gap between the rates of white students and black and Hispanic students. Thirty percent of kids in Durham County don’t attend DPS schools, and half of white students do not.

The strategic plan does not try to hide from these numbers,and its goals are not meek. By the end of five years, the plan intends to raise total proficiency rates to 60%, to reduce suspensions, to reduce teacher turnover and to ensure that 90%of all schools meet or exceed state standards for year-to-year academic growth. The responsibility for fulfilling these intentions, the plan makes clear, goes far beyond the school system.

“Durham Public Schools must be intentional in acting collaboratively and involving all stakeholders, ensuring that our community utilizes its collective resources to support every child,” the plan states. “The Durham community shares responsibility with DPS for the success of our children.”

The plan, for example, calls for an official community partner for every school. Lakewood Elementary teamed with Duke University, the YMCA and KBI Biopharma.

As more businesses “join forces with us,” Mubenga said, “I think it’s going to be a win-win for all of us.”

“That’s a very encouraging sign, because we did not see that in the last four or five years,” Mubenga said.

The principals and teachers have “been very, very intentional to reach out to our respective communities to be able to tell them that DPS is the best choice for our parents. And I think that message resonated with our community, and we’ve started seeing the result of that.”

Principals actively promote their schools, speaking with prospective parents and placing yard signs on school corners. Mubenga plugs popular programs in the arts, sciences and technology at his public speaking engagements. Some schools have used parents as ambassadors to promote school pride and answer other parents’ questions and concerns.

Mubenga said that he knows when companies are recruiting, prospective employees ask, “How good is your school system?”

“That’s why I strongly feel that Durham Public Schools and the business community, they have to work together to make sure that we are successful, and they’re going to be successful as well,” he said.

Jim Key, chair of the DPS Foundation board and a former principal, agrees. “The reputation is critical,” Key said. “We’ve got to improve Durham Public Schools because it’s our future.” But, he added, “it’s also good for business.”

A year ago, the DPS Foundation formed to build community support and investment in the public schools. More than 25 businesses in Durham have helped them fund school projects, with about $120,000 in grants planned for the next year. The foundation also just kicked off its first Teacher Leadership Academy, a year-long program that will train 20 teachers as ambassadors for the system. They are also partnering with Duke’s Sanford School of Public Policy to begin a study on the experiences of second-year teachers, with the hope of finding ways to attract and retain more teachers.

The DPS Foundation provides an online form where Durham families can request a meeting with Mayor Steve Schewel and other city officials to discuss enrolling in DPS.

“I think it’s a tremendous commitment by the mayor, city council, county commissioners and the school board,” Key said, “to meet with these families to promote Durham Public Schools and also listen to their concerns.”

The public school system is “really in the center” of what makes Durham a desirable place to live and work, said Wendy Jacobs, the chair of the Durham County Board of Commissioners. The county spends more than a third of its budget on education, she said, but its funding supports the length of the “cradle-to-career” pipeline, from programs like Welcome Baby to Durham Technical Community College. This year, the county commissioners voted to increase spending on pre-K to $5.25 million. A 2018 report from Durham’s Community Early Education/Preschool Task Force estimates that pre-K funding covers about half of Durham’s 4-year-olds living up to 200% above the federal poverty level. Officials also increased funding to Durham Public Schools by $7.25 million.

Although the county prioritizes school funding, Jacobs said there are “tremendous needs” in Durham that employers can help meet. “The business community has an important role to play in this as a critical partner,” she said. “If we had every business adopt one school, it would be transformative.”

Several organizations, including Student U and Made in Durham, partner with local businesses to promote workforce development and help guide students from low-income families into a college degree and a career. More than half of Student U participants are the first in their families to attend college. More than 80% attend Durham Public Schools. 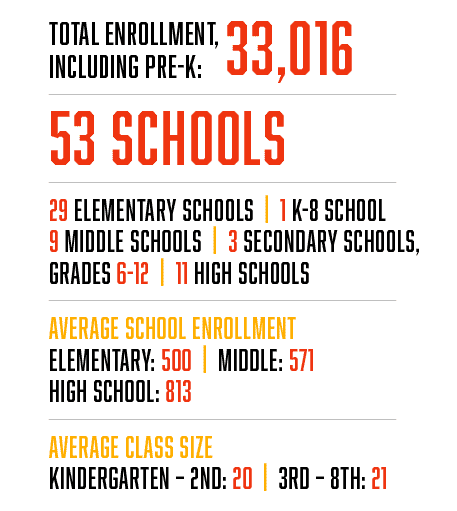 Student U Executive Director Alexandra Zagbayou said the organization accepts some 50 rising sixth graders by lottery, serving about 550 students in total each year.

“I would love an increase of corporate dollars that support the work we do here,” Zagbayou said. “The investment we make now is not just an altruistic investment, but an investment in the future leaders of their corporations.”

Similarly, Fidelity Investments has for the last 10 years supported Lowe’s Grove Magnet Middle School, a STEM school near the firm’s RTP campus with a focus on business and biotechnology.

Fidelity employees have built gardens and installed playground equipment on campus, and helped students clean up and test the pH levels of the creek running along the property. Two years ago, Fidelity expanded its support to W.G. Pearson Magnet Elementary School.

“At Fidelity, we believe we have responsibility in this space,” said Kristen Thompson, senior manager for community relations.

“You want to be in a place where people are thriving,” she said. “I think it’s something we all own at the end of the day.”

Duke sent about 100 student tutors into public schools this spring alone. Their student teachers intern in the classrooms. At the Duke TeachHouse, teachers live together and network and learn best practices. Duke Regional Hospital is home to the City of Medicine Academy, a magnet school for students interested in careers in health care. It supports nine neighborhood schools near the Duke campus. And many university departments provide internships, fundraising, books, tours and advising.

Durham’s boom, the city often says, has resulted in some 20 new residents a day. But the spoils of that boom have gone in great numbers toward charter schools, which have had a more than 110% increase in enrollment over the last eight years and have not been reflected in the traditional public schools, whose enrollment has gone up only 3% in the same time frame.

The rise of charter schools, and disproportionate access to private schools, are contentious subjects for parents, school officials and the general public, contributing to an already inextricable tangle of race, income inequality and social responsibility that will take far longer than five years to resolve.

The rise of charters, likewise, is both in response to and contributing to the system’s reputation, several officials and parents say, adding that the statistics are misleading and are not indicative of the full measure of the system.

“I’m so glad I ignored our public elementary school’s poor letter grade,” one parent, Neeraz Aidapak, said in a social media message to Durham Magazine. Those grades will tell you which schools have a population challenged by an opportunity gap. It will not tell you the quality of the school.”

Despite the complexities of these issues and the strategic plan’s emphasis on shared responsibility, the bulk of the work belongs to the schools and teachers themselves.

At the start of this school year, Hopkins, Lakewood’s principal, said nearly 80% of fourth- and fifth-grade teachers were either new to the school or had moved into a new grade level.

“Over the course of the past year, two years,” he said, “we raised our expectations, and we held teachers to those expectations. Some teachers were reluctant to step up, and we had to move on from them. They’re not bad people, there is just a very different level we have to operate from because we’ve been low performing.”

The current staff members “are hungry,” he said, “and because they are good people, they’re listeners first.”

He added: “When a neighborhood, when a school community, comes together and really listens to each other, invests in its incredible teachers and staff, believes in every student, builds each other up as agents of change, utilizes strengths to push toward ambitious goals, and grounds all of this work in joy, celebration and love – this is what happens.”