Around the World in Eight Plates 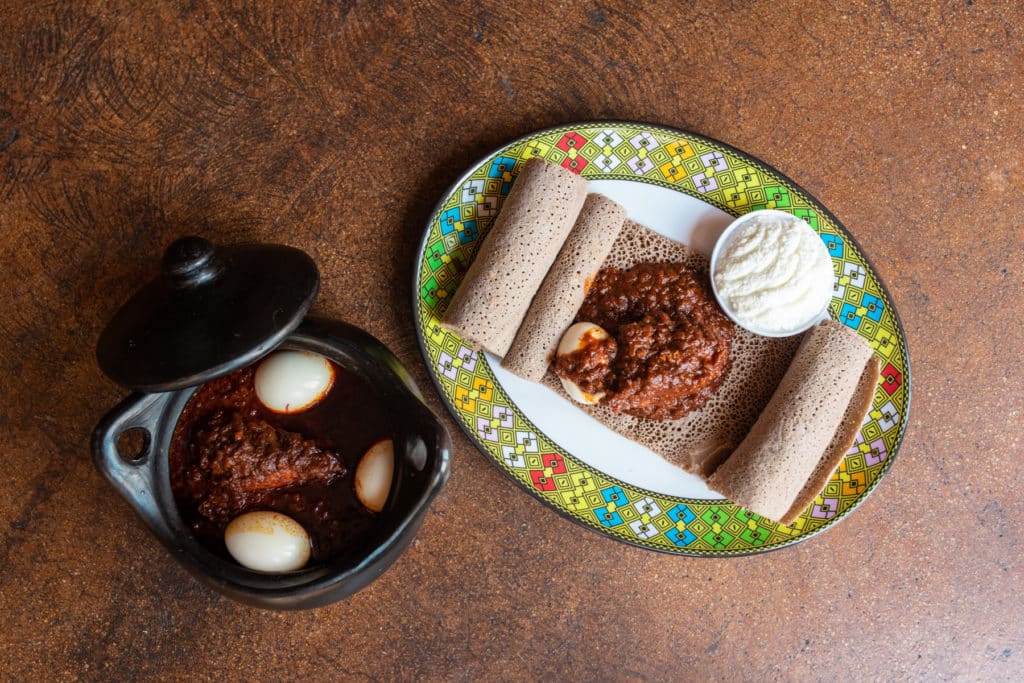 Zewditu Zewdie and Fasil Tesfaye, who were born in Ethiopia, founded Goorsha in 2017. The restaurant, at 910 W. Main St. across from Brightleaf Square, is open for lunch and dinner seven days a week.

Doro wot, a chicken stew slowly simmered with onions, ginger, garlic, berbere and other Ethiopian allspices, is perhaps the African country’s most famous dish. “Berbere is a mouth-scorching chili pepper mix, with ginger, coriander, cardamom, cinnamon and other spices grinded together,” co-founder Zewditu says. The dish has its origins with the Amhara tribe and is often the centerpiece of family celebrations and holidays. Served with a hard-boiled egg and two sides (the azifa, a stewed lentil dish, is a must) as well as generous portions of injera, an Ethiopian flatbread, the doro wot is the perfect dish to share with friends. 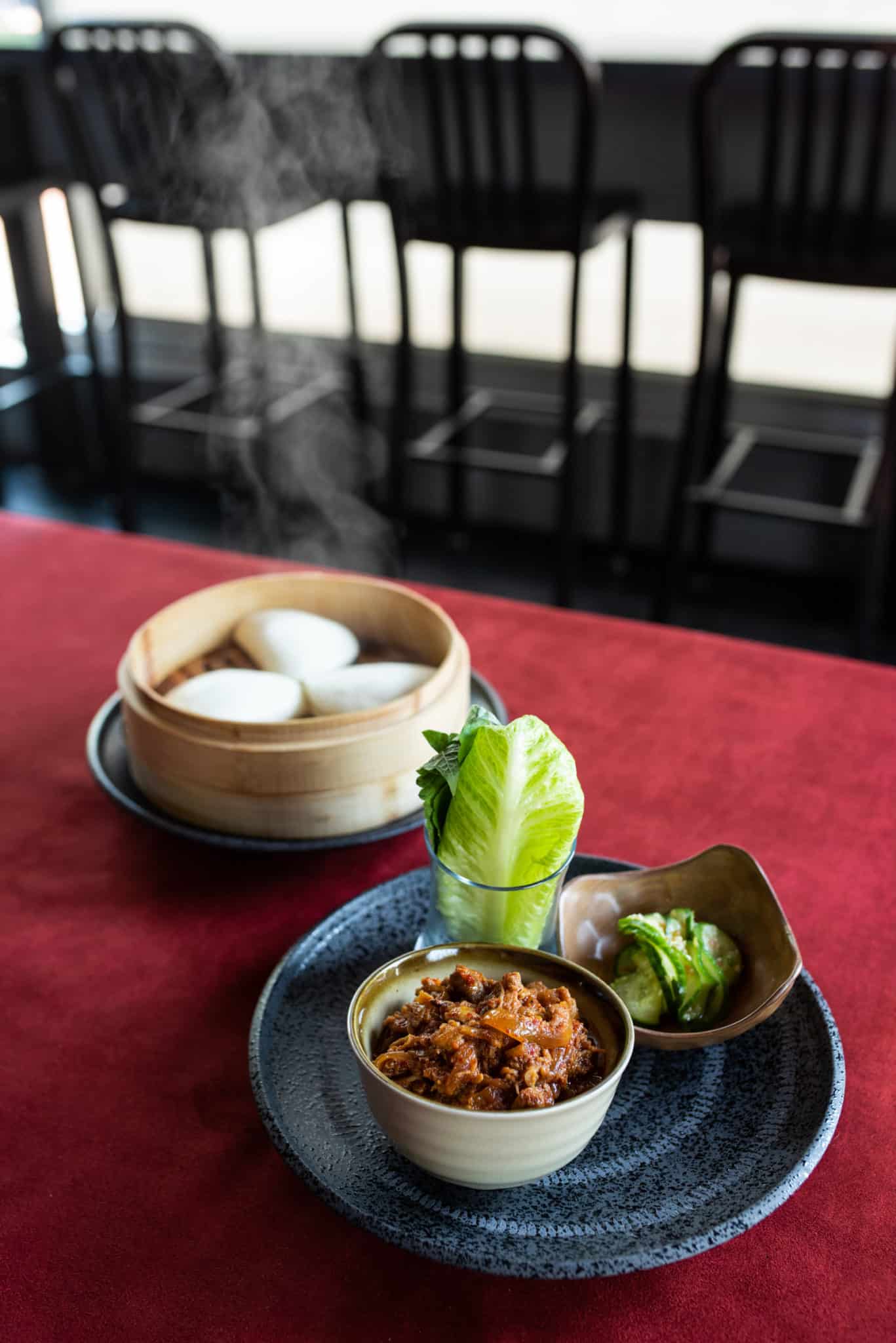 This latest M Restaurant is an ode to Korean drinking culture, and the spicy pork with steamed buns is just the sort of thing you might find weary (and perhaps buzzed) Seoul office workers gobbling down after a night of karaoke. “It has a lot of the elements that represent the ‘ideal’ drinking food,” Michael says, “and Korean food in general.” The food is “spicy, full-flavored and [has that] Korean barbecue element that really captures the heart of Korean food culture.” 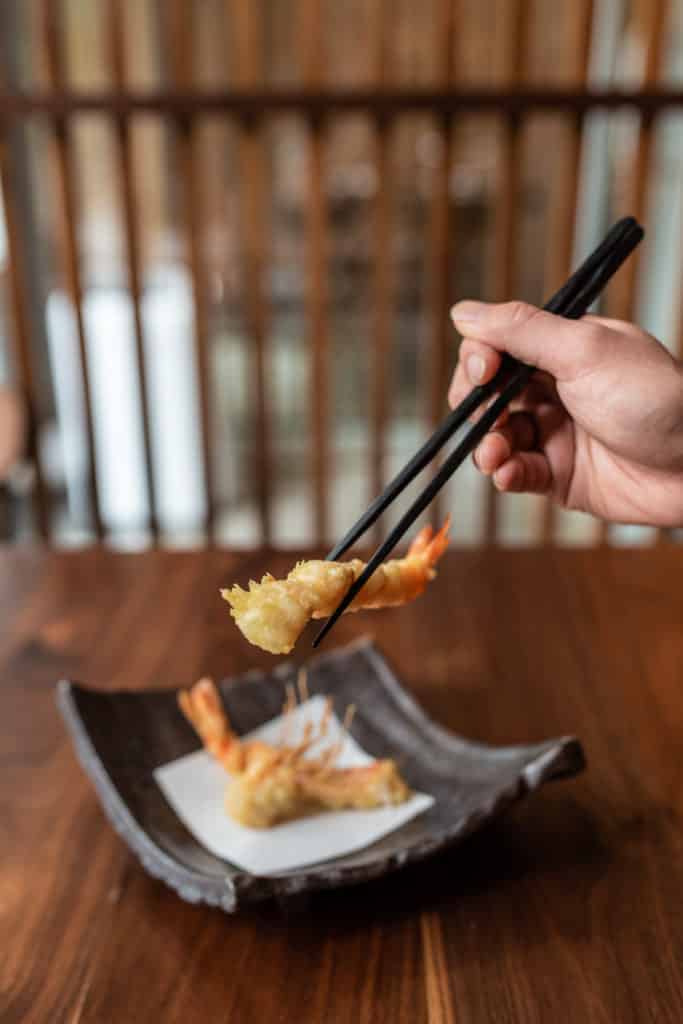 “The nature of tempura is simplicity, to let the natural flavors shine,” Michael says. By tasting the two types of shrimp back to back, diners can decipher the unique flavors of each. Meals at M Tempura are served omakase style, with multiple courses meant to create one overarching dining experience, but each meal always begins with this combination.

A standout on COPA’s dinner menu, arroz con pollo is familiar to nearly every Cuban, “whether they live on the island or abroad,” Elizabeth says. This dish makes a lot out of a little, and, thanks to its adaptability, has traveled the world with Cuban immigrants. It most commonly includes a sofrito base (onions, garlic and tomatoes) with long-grain rice, chicken and saffron for the signature yellow color. “If saffron isn’t available,” Elizabeth says, “another coloring agent, like annatto, can be used.” She adds: “Because of this flexibility, arroz con pollo has been able to withstand the test of time, adapting to the needs, resources and tastes of almost any given moment in history – much like Cuban
culture itself.”

Zweli’s got its start as a catering company operated by Chef Zwelibanzi Moyo-Williams, who served customers across the Triangle. Chef Zwe and her partner, Leonardo Williams, recently opened their first brick-and-mortar location at 4600 Durham-Chapel Hill Blvd. Zweli’s is open seven days a week for lunch and Sunday brunch, and Monday through Saturday for dinner. 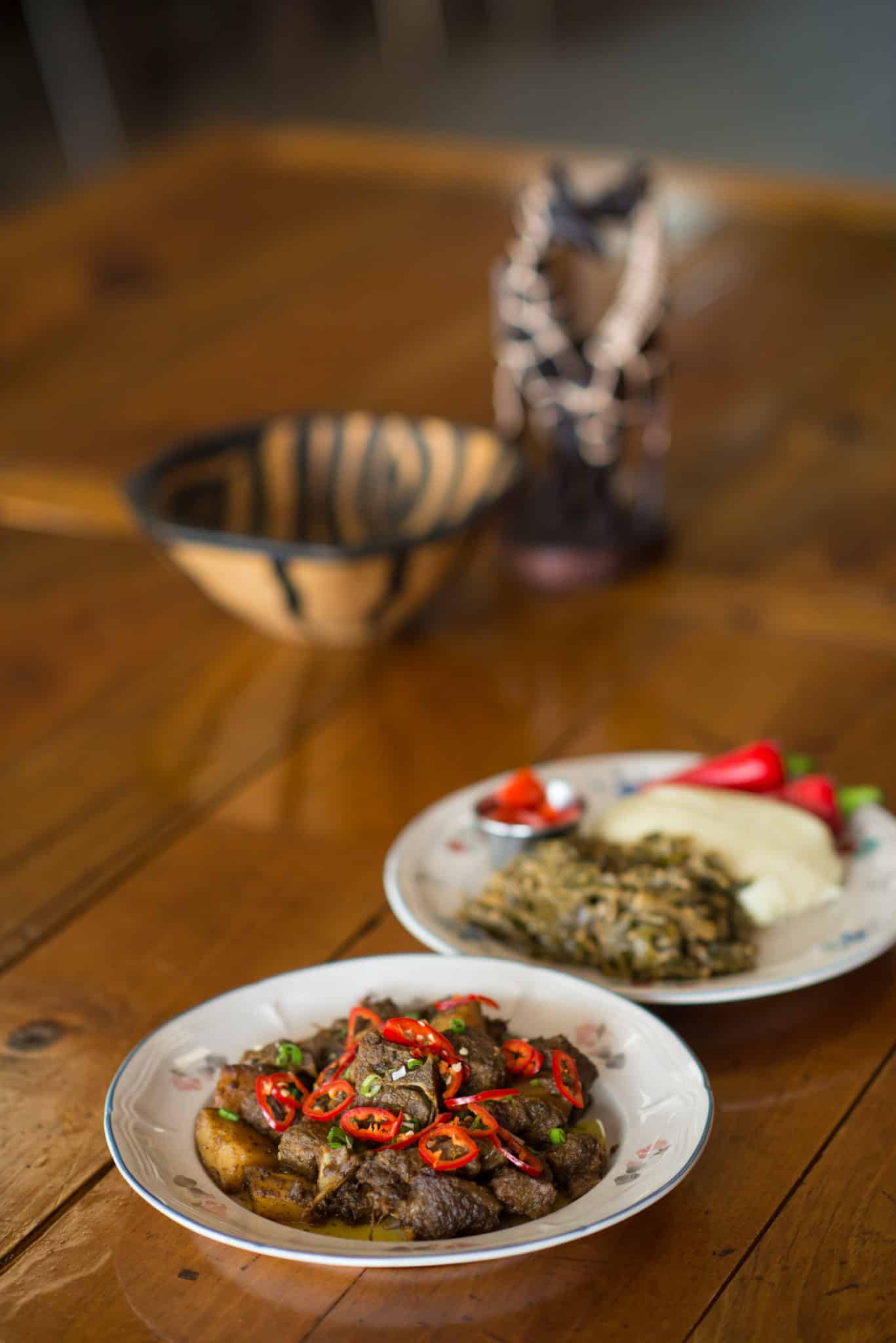 This dish is Zweli’s on a plate. Goat is an important source of protein in Zimbabwe and is often the dominant protein on the plate. It pairs well with the peanut butter stew, or dovi – which is “just as popular as barbecue sauce in the United States,” Leonardo says – and with the sadza, a cornmeal mush commonly used as a side dish. The three components together create a dish that is emblematic of Southern African cuisine. “Collards, cornmeal [and] peanuts are all essential to basic survival,” Leonardo adds, “and are plentiful, as many grow these necessities in their own backyards.” The goat stew reflects not only Chef Zwe’s African roots, but also pays homage to the historical culinary trends
of Southern Africa.

Founded by the Saleh family as Neomonde Baking Company in 1977, the popular Wake County eatery opened at The Unscripted Hotel last year. It was a mission of brothers Sam, Joe, Mounir and DeGaulle – who immigrated from Lebanon to the U.S. in the ’70s to escape civil war and for better educational opportunities – to share their mother, Cecilia’s, recipes with their customers. It’s open seven days a week. 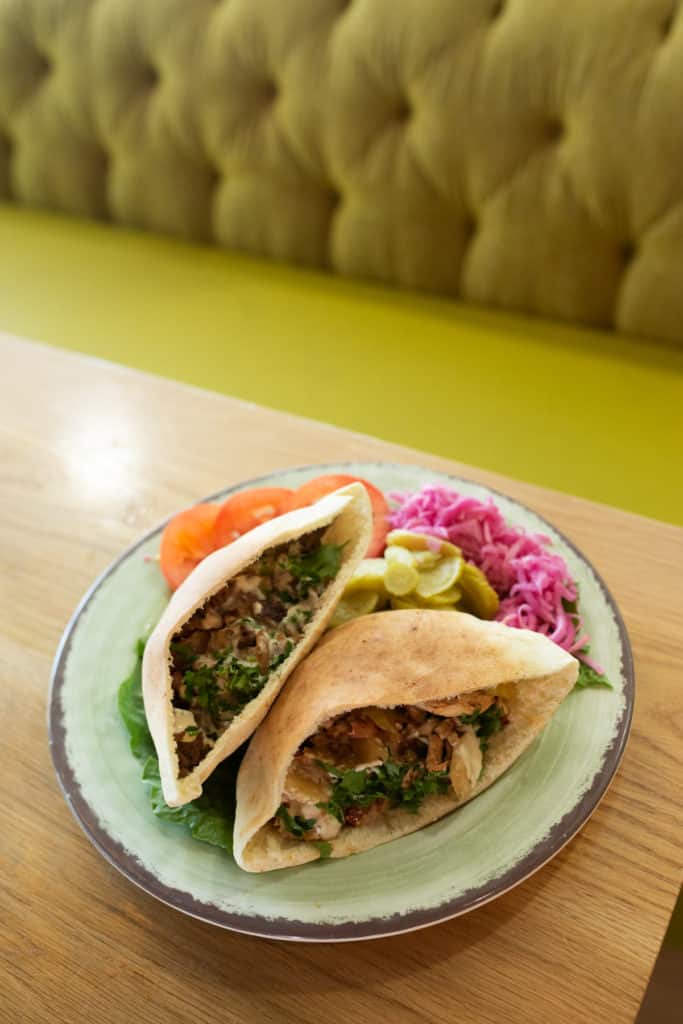 Whether chicken, beef or lamb, shawarma is a staple street food in Lebanon and has emigrated the world over. In Neomonde’s version, (one of the most popular dishes on the menu, its owners say), chicken thighs are marinated in a blend of traditional spices and then quickly seared, rather than slowly roasted on a vertical cone like you might see on the streets of Beirut. The complex spice blend is a homage to both the Roman (western) and Ottoman (eastern) influences on Lebanese cuisine. Served in a pita with garlic paste, tomatoes, Lebanese pickles and a lemon tahini dressing, Neomonde’s shawarma is the best of Lebanon in one bite.

Namu is the brainchild of the owners of two longtime Triangle food trucks, Bulkogi Truck and Bo’s Kitchen. Located at 5420 Durham-Chapel Hill Blvd., Namu has reinvigorated the beautiful midcentury modern space to include a coffee bar and beer garden. Namu is open Monday through Saturday starting at 7 a.m. 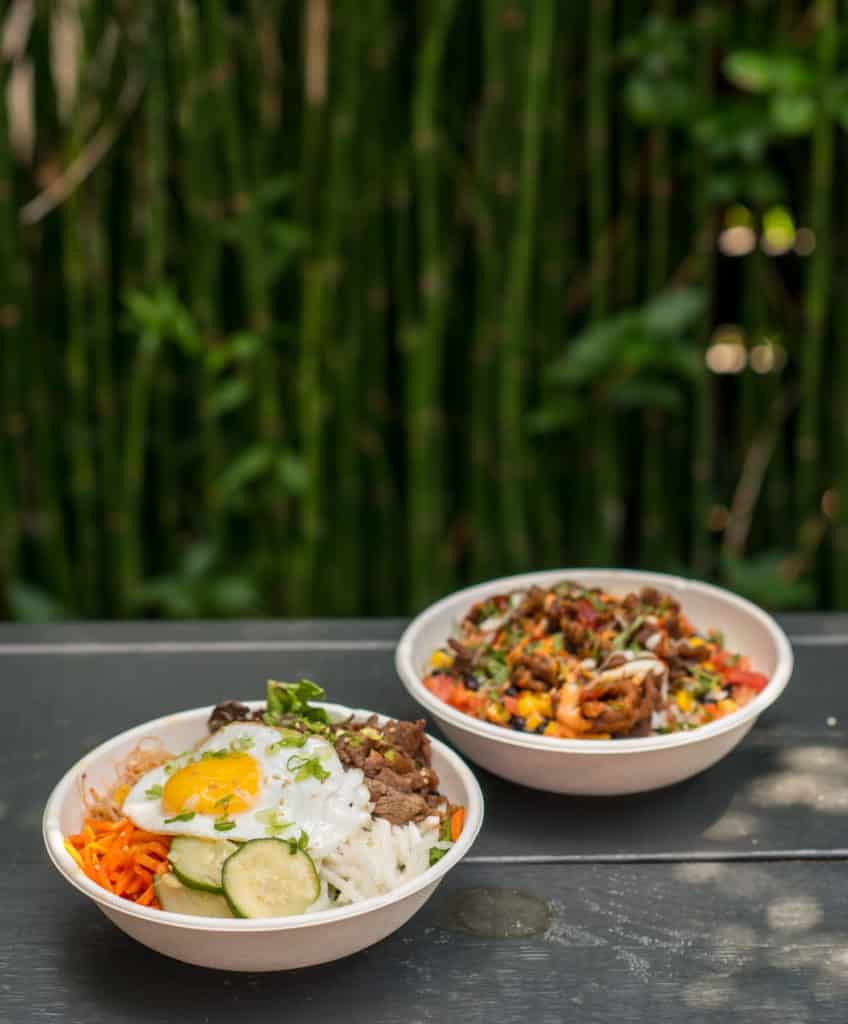 Co-owner Joe Choi couldn’t pick one dish most emblematic of Namu’s Korean cuisine. “I have to pick two,” he says. The Korean BBQ burrito bowl is a nod to his mother and what he ate growing up, first in Chicago (after emigrating from South Korea at 11) and then in North Carolina, after moving here 10 years ago. The bowl’s base of fried rice is covered in fire-roasted corn, black beans and a four-cheese mixture, and then topped with Namu’s signature Korean barbecue. The other dish, bibimbap, comes from Namu’s other owner, Bo Kwon, who came to North Carolina from South Korea a decade ago. Bibimbap is arguably the most popular dish in South Korea, and Namu’s version trends toward the traditional, with a base of white rice topped with pickled radish, sauteed vegetables, a fried egg and Korean barbecue. Both dishes reflect Joe and Bo’s backgrounds and speak to the fusion of Korean-American and traditional Korean cuisine for which Namu has become known.

Viceroy opened downtown at 335 W. Main St. in 2016 as a partnership between Nick Singh, BJ Patel and Bull McCabes owners Rhys Botica and Malachy Noone. The restaurant is closed on Tuesdays. 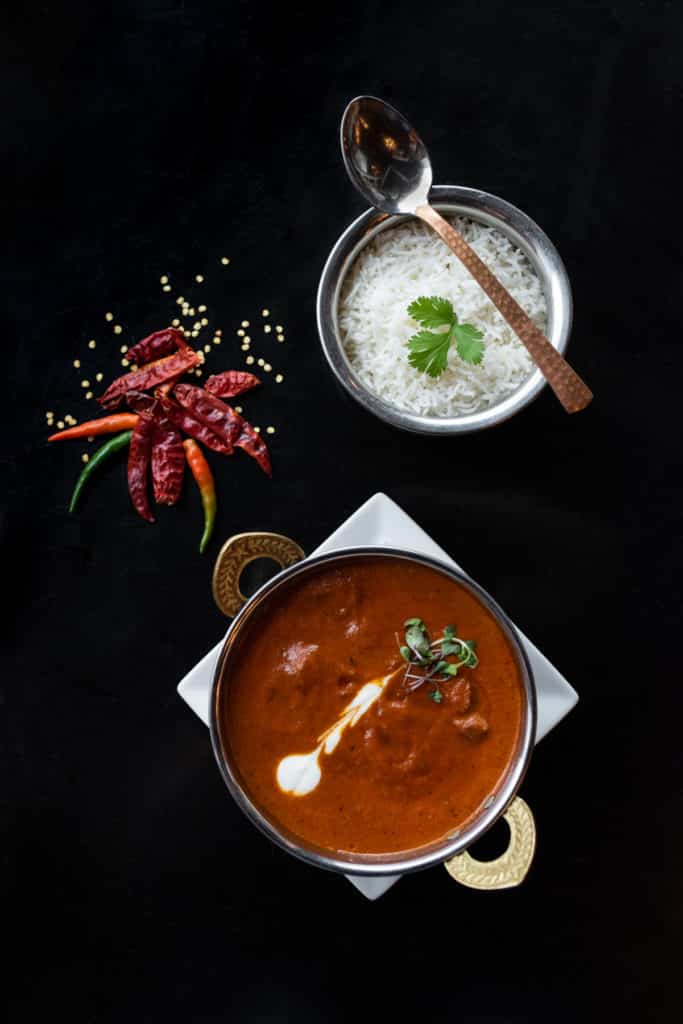 Nick grew up in Britain, eating the dishes of his Indian heritage at home, so it’s no surprise that the downtown restaurant’s standout dish is a mashup of Indian and British sensibilities. Murg mykanwala is Viceroy’s answer to chicken tikka masala, a national dish of Great Britain. The dish’s origins are debated, but Nick caters to the version of the story that a Bangladeshi chef in Glasgow invented the dish in the 1970s to accommodate a complaining customer. Viceroy prepares it with chicken or paneer (although customers can substitute lamb or shrimp on request) simmered in a spiced creamy tomato sauce and topped with almonds.