Jokes on the Bus Go Round and Round

The five founders of Bull City Laughs are all standing in a packed barber shop off of Fayetteville Street. This is where it all started for them. And one of them just wrapped up with a customer.

“Do you cut everyone’s hair?” I ask Akili about this group – Brandon Wright, Omar Helms, Q Randle and Terrell Wilder – standing around us.

“Yeah,” he says with a smile. But that’s only half the story of how this quintet came to own Durham’s only comedy tour bus business. “We did a North Carolina hip-hop documentary – that was me, Omar and Q,” Akili says. “Before that, I used to do battle rap events, and Terrell did my security. Before that, I was doing film, and I was doing work with Brandon.”

Brandon, who worked for the Funny Bus in Charlotte, a similar concept, was driving there every weekend. Akili encouraged him to think about starting one here. Once Brandon was convinced it was viable, Akili asked if he was ready to pull the trigger. “I said, ‘Yeah,’ and he said, ‘Cool, cause I’ve told a few guys who are interested to hear what you have to say,’” Brandon says. “We met here one evening, and we were all like, ‘Let’s do this.’”

Akili says, “Everybody I pulled in, I had worked with before. I knew they had a good work ethic, and good character. And they all had the urge to do something different. Everybody’s conversation was, ‘Man, I want to start a business.’ Sometimes it wasn’t exactly specific, but everybody had the urge to do something special. [We wanted to] do something for the city that nobody’s ever done before. So when I put the word out, it was like gasoline was already on it. Everything moved pretty quickly after that.” 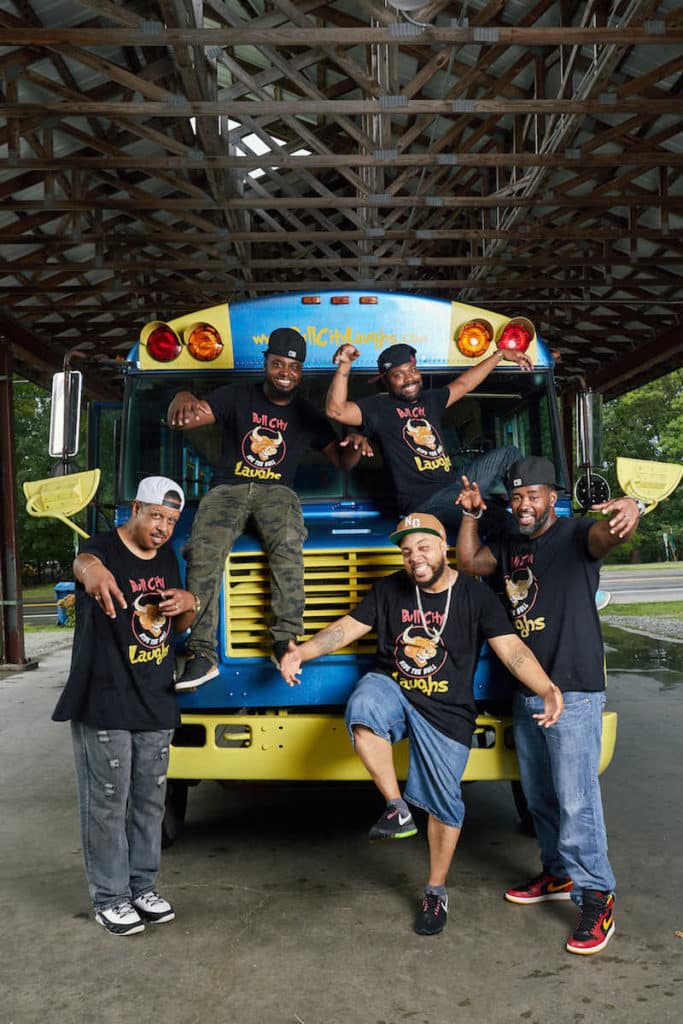 That conversation happened just a year-and-a-half ago. The Bull City Laughs bus went on its first tour March 15 – Omar’s late mother’s birthday – after months of hard work, and a little help. They bought the bus from a woman Akili knew through cutting her husband’s hair. “It’s the haircut network,” he says. The material and labor to build and install the seats was essentially donated by a man who had been in Brandon’s military unit in the Air Force (Omar and Terrell are also veterans of the Army and Air Force, respectively). Some of the audio equipment was donated by audio-visual company Maestro Productions. “We definitely had a lot of help, people who believed in the business,” Omar says. “And who believed in us,” Terrell adds.

The bus has been making tours for a few months now, and based on the reviews they’re receiving, Brandon says, most people didn’t know quite what to expect, but nearly always end up having a great time.

Q says he feels a sense of pride that the group committed to making this dream happen. “I’m sure we all start something and drop it,” he says. “This time, we stuck it through. That was the cherry on the cake for me – the fact that we just did it.”

Akili adds, “I feel like when it comes to black-owned businesses, we have to continue to push and continue to create because that was like, that’s the heart of the history of Durham, that is Black Wall Street.

“And I’ll just say, I’m just excited to see where my brothers go from here. ‘Cause I feel like 10 years from now, based on this success –”

Q chimes in, “We could be anywhere.”