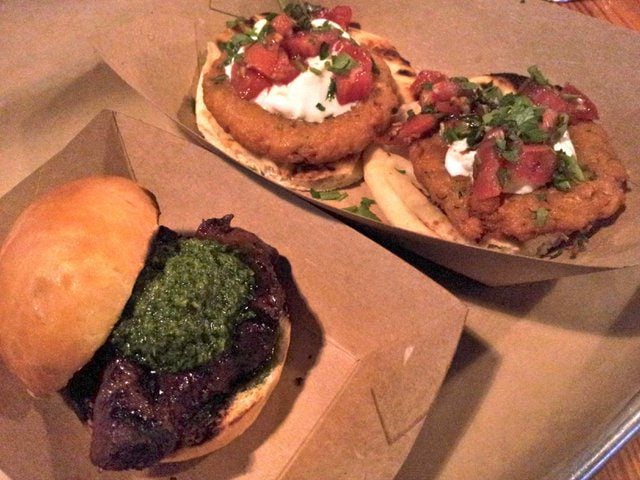 One of Durham’s go-to spots for music and entertainment is now serving up more than just great bands and delicious drinks. Motorco Music Hall opened its kitchen, Parts & Labor, in its garage bar late last year, and I finally had the chance to sample some of its dishes at an event this past week.

From bratwurst and wings to udon, edamame and latkes, the menu offers a lot of variety not just among the dishes, which are labeled on the menu based on dietary restrictions – vegetarian, vegan, dairy-free and gluten-free – but there are twists within each menu item, too.

I nearly ordered the fritters de jour, but a tray of falafel came out of the kitchen just before I made my request. Seeing bruschetta and tzatziki atop the two chickpea fritters immediately changed my mind, so I ordered one along with a churrasco slider. The addition of a Foothills Hoppyum IPA put my order over $10, but it was a solid meal for the price. The fritters came on top of slightly larger pieces of warm tandoori naan and acted as a large appetizer to the slider.

The slider consisted of a grilled filet of beef with Argentinian chimmichurri sauce on a toasted brioche roll. The seemingly small serving packed a lot of juicy flavor, although the texture of the filet made it a bit more difficult to gracefully bite into. I’ll go after it with a knife and fork next time.

A Parts & Labor perk is that it serves food till midnight every night Motorco is open, so it’s a prime spot for inexpensive late-night fare. Check it out if you’re catching a show this weekend and let me know what you think.