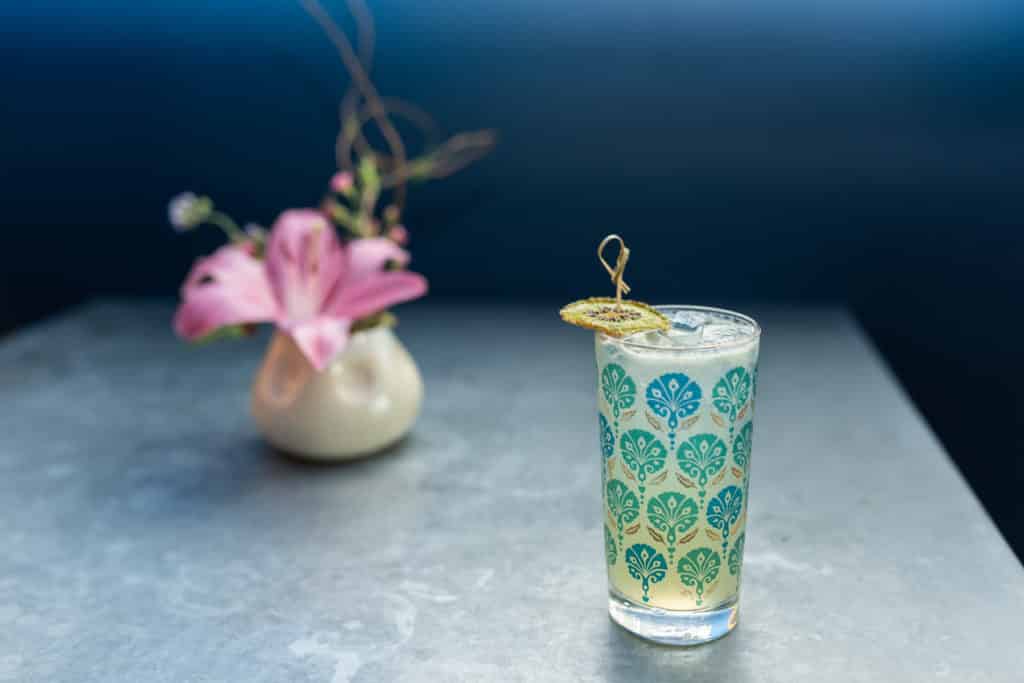 Shake it up with ice, strain into a glass, throw in some fresh ice to about an inch from the top and then finish  with a splash of club soda, “for the fizz part” – Mike says. Garnish with a dehydrated kiwi slice. Mike also adds just a little bit of vinegar to his kiwi syrup. “You don’t really know it’s there, but it does heighten the flavor,” he says. “It adds another depth and dimension, and, you know, on a practical level, helps preserve it a little bit.”

The vermouth also lends the same sensibility, Mike says. “There’s only about a half ounce in there, so it’s not a main ingredient, but I just find that it can bring a lot of flavors together, particularly with lighter, citrusy things like this,” he says. “That’s one ingredient that can take a backseat but yet elevate the cocktail nicely.”

When Mike was planning out the cocktail, he tried to find Durham connections to liquors, but was relatively unsuccessful. So instead, he started looking into the types of cocktails that were around 150 years ago. He found the Fizz. “It came to me pretty quickly, and I don’t know if it was the alliteration of cucumber and kiwi, but it just struck me as an interesting and maybe unusual combination,” Mike says. “I think it’s a refreshing concoction – and even a little palate cleansing – that’s not too heavy for anything else that might come after small plates.” 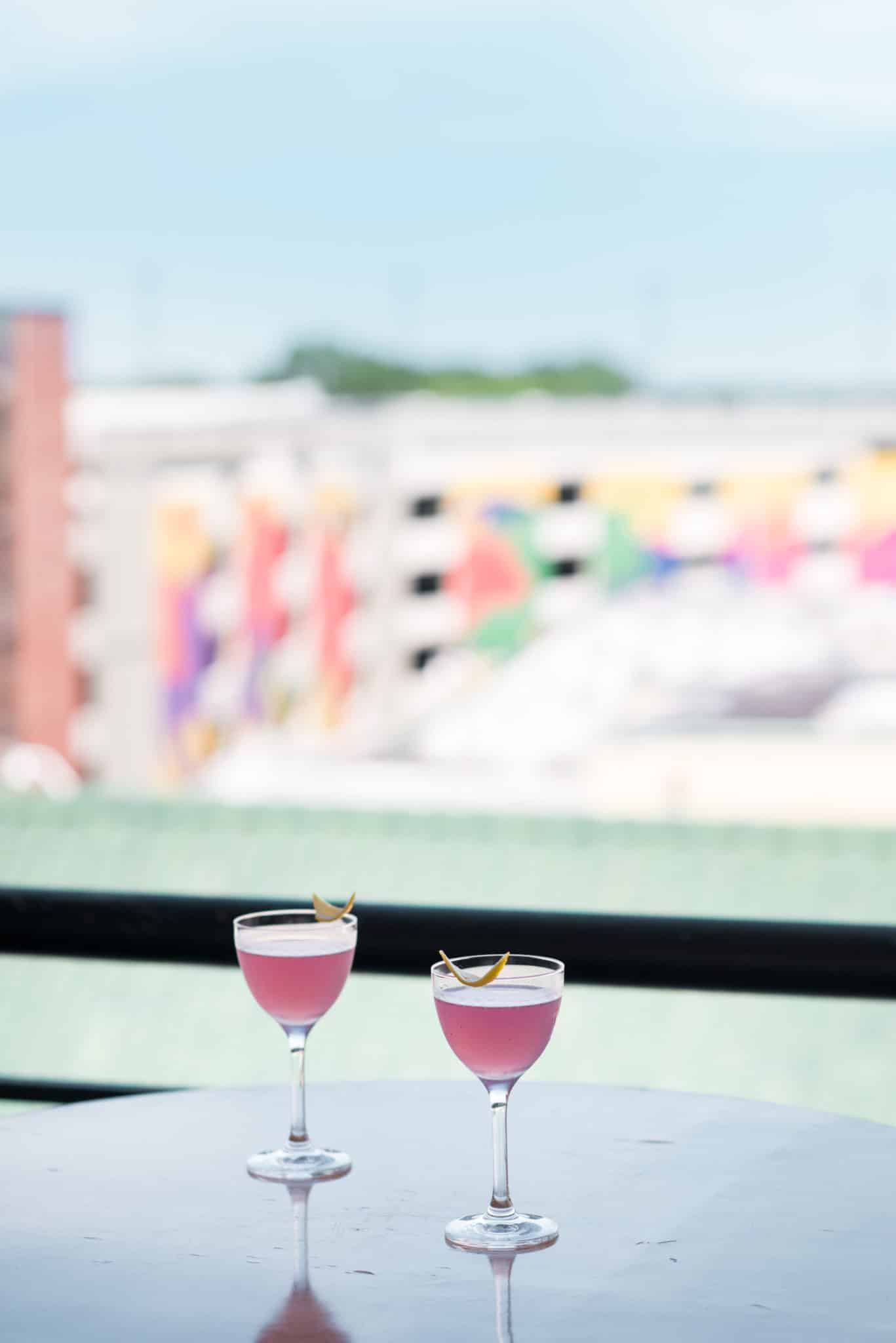 Pour the gin over ice, and add what Brice calls “the magic ingredient” – the lavender- and butterfly pea flower-infused Luxardo Maraschino Liqueur. When you add the citrus component and stir, it transforms from a dark blue to more of the light indigo you see in the glass. “It’s bright and floral,” Brice says. “It’s straight to the point, but it’s not going to knock you off your feet either.”

The concoction is poured into a Nick & Nora glass and garnished with a slice of lemon peel, twisted into the shape of bull horns. “It’s just four ounces, so it’s a nice size to sip on,” Kevin says.

“Seeing that Durham was the first city in the South that had textile mills that produced denim was where the whole idea originated,” Brice says. “We have our uniforms [at The Durham], which are very decked out in jeans and chambray shirts. I thought it would be a great way to tie that together.

“The other thought process was people come up for the view, of course, and especially around sunset time. So the thinking was that ‘The Wild Indigo Yonder’ was kind of an ode to the past, present and future of Durham.”

The drink is modeled after an Aviation, but since crème de violette is hard to obtain in North Carolina, Kevin and Brice improvised and created the vibrant color by utilizing the Chinese butterfly pea flower. “It’s supposed to have a vivid, almost sunset-like hue to it, while also being indigo, [to represent] the dye for the jeans,” Brice says.

For pairings, Kevin recommends the Picnic Eggs, and Brice suggests The Cape Lookout – “you get shrimp, clams, oysters, smoked fish and all the accoutrements: house-made hot sauce, mignonette, fresh lemon and everything crackers.” 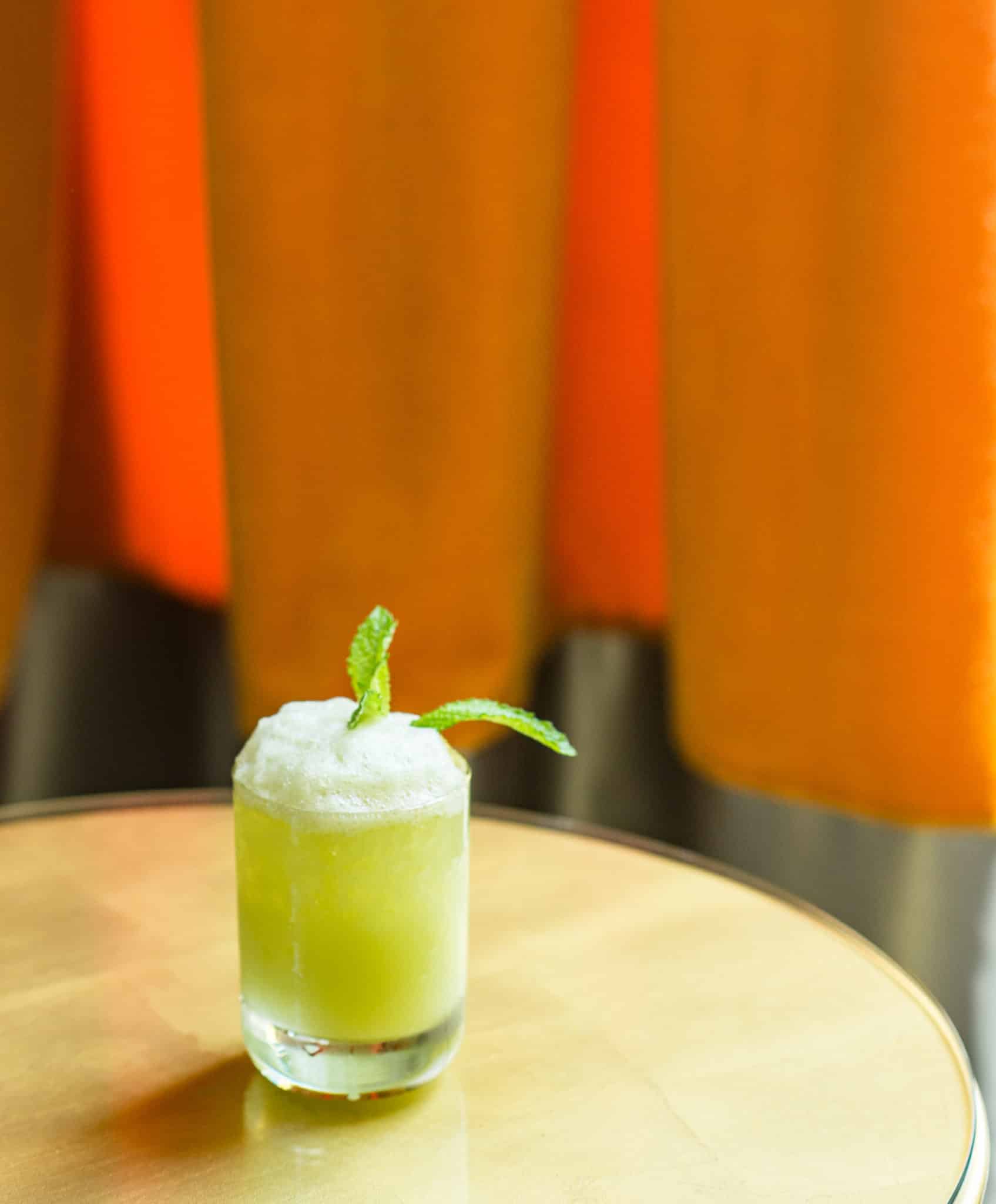 For this play on the well-recognized phrase on the Bulls’ sign at the Durham Bulls Athletic Park, all of the above ingredients (apart from the foam) are shaken together and poured over a glass of crushed ice. The drink is topped with the foam – which combines “cucumber juice, Versawhip, which is a natural protein to make it foam, and then xanthan gum as a stabilizer to keep it foamy,” Travis says – and garnished with mint leaves.

Travis explains that the drink was originally inspired by the classic cocktail The Last Word. “It’s kind of a riff off of that,” he says, considering the amalgamation of gin, Chartreuse and citrus. “The foam was just something I had been wanting to do for a while,” he says. He collaborated with Counting House Beverage Manager Kacey Liebes to come up with this version.

If you like gin and tonics but want to branch out into something new or different, Travis says the Hit Grass is a great option, but he stresses that people who aren’t the biggest gin fans will like it, too. “It’s super easy drinking,” he says. “Light and refreshing.” And it hits one of the marks of all great drinks, as the bartender who created it says, “I really enjoy the drink personally myself.”

Thanks to the passage of Senate Bill 290 on July 16, distilleries in North Carolina can now serve mixed drinks on-site. It also lifts the restriction of directly selling only five bottles of liquor a year per customer. Durham Distillery (whose products provide the base ingredient in all the Durham 150 cocktails) and other distilleries, including The Brothers Vilgalys Spirits Company and Graybeard Distillery, have shared plans to build out cocktail bars at their facilities. “Approval of this bill changes everything and enables us to celebrate our brand in the fullest and most experiential way,” Durham Distillery Co-Owner Melissa Katrincic said in a press release.

Durham Distillery’s cocktail bar will be on the ground floor beneath the distillery with an entrance and outdoor patio. The bar, Corpse Reviver, which is named for both the classic gin cocktail, Corpse Reviver No. 2 – composed of gin, absinthe, Cointreau and lemon juice – and its basement setting located in a former coffin shop, will be modeled after the modern gin bars of London. The bar is slated to open in early 2020.

The old law also prohibited the distillery from serving their canned cocktails during tours. Beginning this month, guests will be able to sample the cans – Conniption Gin Rosé Spritz, Gin & Tonic and Cucumber Vodka Soda – in addition to their flagship Conniption American Dry and Navy Strength gins, Cucumber Vodka, and Damn Fine Liqueurs.