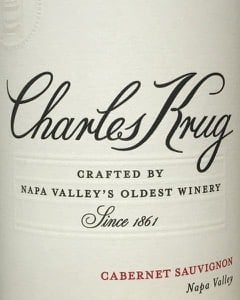 Many of you know the Charles Krug name as Napa Valley’s oldest winery. Established in 1861, during the very distant American Civil War, it has had a storied but checkered history. The Mondavi family, owners since 1943, endured a split between sons Robert and Peter. Robert left in 1965 to start his own eponymous estate, and Peter, mom’s favorite, stayed on @ Krug. (He recently died at age 101!) Krug Cabernets represent the old-style, dry, rustic reds that made Napa famous. This new release shows exactly what the fuss has been all about.

*This is the Napa Valley bottling, not the less expensive “Yountville”.

Trained as a classical clarinetist and conductor, Arturo plied his trade for many years in New York, performing with the Orpheus Chamber Orchestra, New York City Opera, the American Symphony and countless chamber music groups. While living in Durham, Arturo became the wine manager at two iconic gourmet stores: Fowler’s in Durham and Southern Season in Chapel Hill. He had a wine spot on NPR in the ’90s and has been a continuously published wine journalist since 1997. He has won national awards for his work and is currently writing for Durham Magazine and its weekly blog, “Wine Wednesdays”. In addition, he loves teaching the clarinet. Read more on his website.