What We Love About Living in Tuscaloosa-Lakewood

Boundaries Durham-Chapel Hill Boulevard to the south, James Street to the east, Chapel Hill Road to the west and Lakewood Avenue to the north.

Perhaps more than any other neighborhood in Durham, Lakewood’s beginnings are rooted in transit. At the turn of the 20th century, the area comprised a few farms and homes, and was the “end of the line” for the city’s streetcar. That all changed in 1901, when Richard H. Wright and Julian Carr, founders of the Durham Consolidated Land and Improvement Company, purchased Durham’s streetcar system. They quickly realized the Lakewood land afforded a unique opportunity to build an attraction that would increase ridership and bring vitality to the neighborhood.

Lakewood Amusement Park opened in 1902, and for 30 years, served as a place to gather for picnics, play arcade games and share a soda with neighbors. It featured a bowling lane, casino, swimming pool, carousel and even a wooden roller coaster. Today, Lakewood’s residents have put their spin on century-old homes, and its commercial district is once again being re-envisioned as a new destination for Durham’s growing community.

Myers Sugg has been a resident of Lakewood’s Historic District for about 20 years. He and husband Patrick Wooten purchased their 1916 home on James Street in 1998. Before that, the home had been exclusively owned and occupied by the family that built it: “Charles Myrick and his siblings built the home themselves, and then his daughter, Frances, lived there until we bought it,” Myers says. The home was constructed with bricks salvaged from a tobacco warehouse, and its craftsman details have stood the test of time, both in its quality and aesthetics. “At the time the home was built, everyone in this area came from modest means,” Myers says. “It’s amazing to see the amount of detail they were able to put in, and the things they clearly valued, in the design of the home. It’s so charming.” 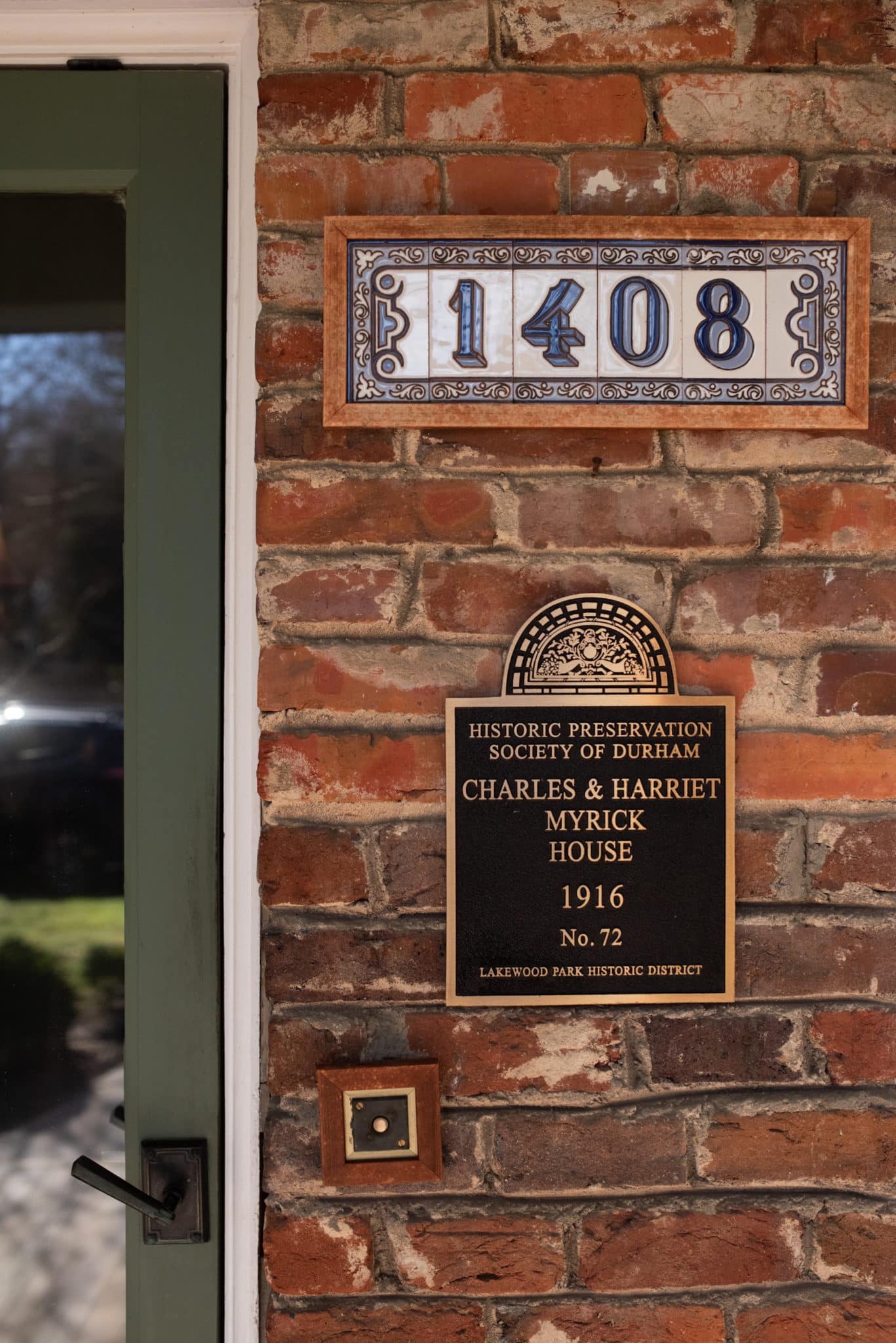 Myers and Patrick chose to embrace that character in the home, making few changes other than enclosing the porch to create a den. “Another development phase took place in the 1950s and ’60s, so there are a variety of home types and sizes here to suit all kinds of people,” Myers says. He notes access to Duke University, the local YMCA and proximity to highways as some of the more practical amenities, but says the real beauty of life in Lakewood is its people. “It’s wonderful that there are folks who walk the neighborhood and will stop and say hello – in some instances, we will see a familiar face we hadn’t seen in years, and of course we get to meet so many new and interesting people. And the shops in the area are improving all the time.”

The neighborhood, says Martin Curtis, who has lived next door to Myers and Patrick since 2012, “is definitely still in transition.” A three-month search led to this home that Martin, his wife, Caitlin, and their nearly 4-month-old son, John Martin, now share. Like Myers and Patrick’s home, it was built in 1916, though the Curtis home has had a considerable number of renovations and additions. “We redid the kitchen, and the previous owners added a large garage extension,” Martin says. This was a huge draw: “Garages are really rare in homes this age.”

The family enjoys the connectivity provided by life in Lakewood. Caitlin, a nurse at Duke University Hospital, especially appreciates being able to walk or bike to work. After living on the West Coast, she says that Durham’s small city vibe is unique. “I love the mix of people, the range of home styles and the neighbors,” she says. “We have all of the amenities and resources of a much bigger city, but it’s still so accessible and friendly.”

Martin adds, “We love the food scene, too.” Their current favorites include The Boot, Cocoa Cinnamon and Thai Cafe. “And we can’t wait for [the new] True Flavors to open,” he adds. On nice days, the Curtis family can often be found strolling through Sarah P. Duke Gardens or taking in an exhibit at the Nasher Museum of Art at Duke University.

Maggie Smith, owner of Pine State Flowers, moved into her shop on Chapel Hill Road in April 2014. “There were a lot of empty storefronts along this road then,” she says. “Seeing more businesses move in is great.”

Maggie credits the shop’s success with its commitment to locally sourced seasonal flowers. “We prioritize farmers – I think that’s an ethos Durham has embraced.”

In growing her business, Maggie has also restored a building that had been in disrepair for years. “It’s architecturally beautiful, and we were able to reuse a lot of materials.” Originally the home of the Rolls family, who were florists for the Duke family, the small Tudor was built in the 1930s and remained open as a flower shop until the 1970s. “The real strength of Durham is definitely small businesses,” Maggie says. “So many people come in here and tell me they have memories of coming to the flower shop with their parents, or that their first job as a kid was delivering flowers.”

A few months after Pine State Flowers opened, The Scrap Exchange moved into the Lakewood Shopping Center. “We were excited to move for a lot of reasons,” Ann Woodward says. Formerly the executive director for The Scrap Exchange, she recently began a new role as program director for the entire Reuse Arts District, a planned redevelopment of the northern part of the shopping center, which will transform the area into a “multi-faceted cultural, environmental, historical, recreational and community-based destination,” according to The Scrap Exchange website. “We have 12.5 acres of commercial space, are on the bus line, have access to Duke, downtown and plenty of parking,” Ann says. “And lots of really great neighbors.”

Ann loves that the creative center’s home in Lakewood has a history as a gathering place: “It has always been a place to experience community in Durham. Nothing aligns more with our mission than that.”

Next door, Rhythms Live Music Hall opened in January. It began as an idea many years ago, but the search for the right venue was a difficult one. “I needed a lot to make the concept viable, and when the space opportunity at Lakewood came, I couldn’t believe it,” says founder Victor Graham. Though not originally from Durham, Victor has lived here for more than 30 years; it’s home to him, and he feels Lakewood has embraced him with open arms. “I feel like a partner in the revitalization plan for this area, rather than a tenant in a building,” he says, and describes the Reuse Arts District as his family. “Although a downtown location might have more city flair, we have parking and other great amenities. And there isn’t a bad seat in the house.”

Myers believes that, now more than ever, Lakewood is a wonderful place to be. “We have great proximity to downtown, and the commercial improvements are continuing,” he says. “I always encourage folks to come check out the neighborhood, introduce yourself and consider joining us in investing in the community. It really is a special one.”