Three Bull City Fitness Influencers You Should Be Following 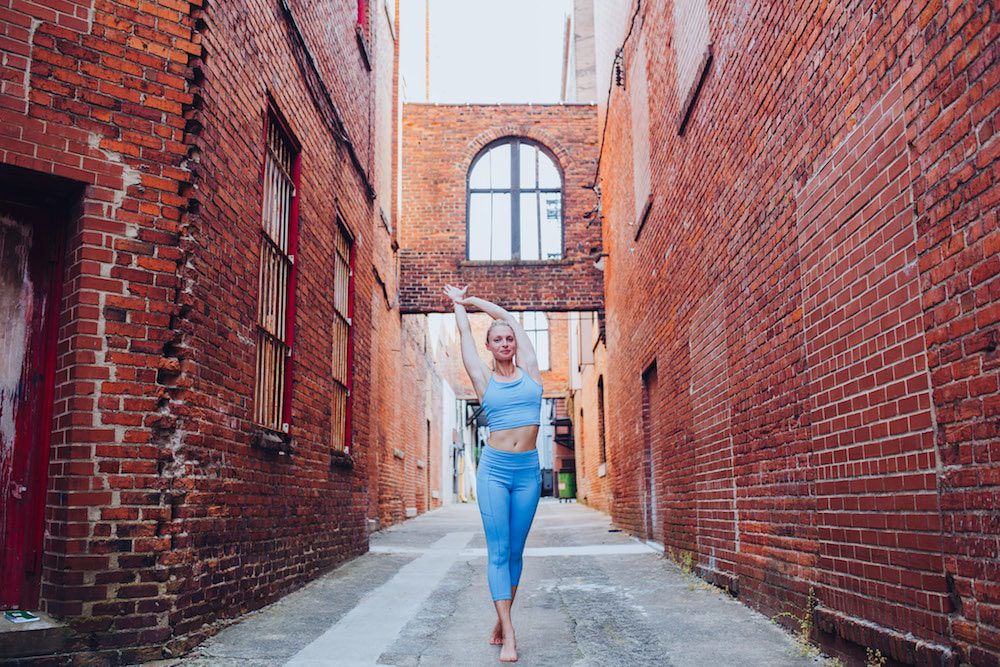 Photography and words by Mick Schulte

If Durham had its own Avengers, these three would definitely be part of the crew. Strong, honest and superhumanly inspiring, Ally Born, Desmond Scott and Ruth Penado share their workout journeys with thousands of fans in Durham and beyond through Instagram. And just like any true superhero, each influencer uses his or her power by focusing on a specific niche and appealing to a particular audience.

They shared with us a bit about their motivations while taking to the streets of Durham to showcase some bionic moves.

“I don’t always consider myself an influencer, but then I’ll have these moments,” Ally, a Durham-based yoga teacher and triathlete, says. “Like when a woman from my apartment complex noticed me and said I was the first Instagram celebrity she’d ever met.”

With more than 30,000 followers on Instagram, Ally’s celebrity status is becoming a reality as she posts about her journey. “I don’t take it lightly,” Ally says. “I try to share positivity while still being real. There’s so much negativity portrayed on media already that it just feels right to share a lighter message.”

She attributes the growth of her account to when she started doing yoga challenges and connecting more with her followers. Many yogis use the hashtag #yogachallenge to share advanced poses. Thanks to Ally’s bendy body, her posts gained attention. 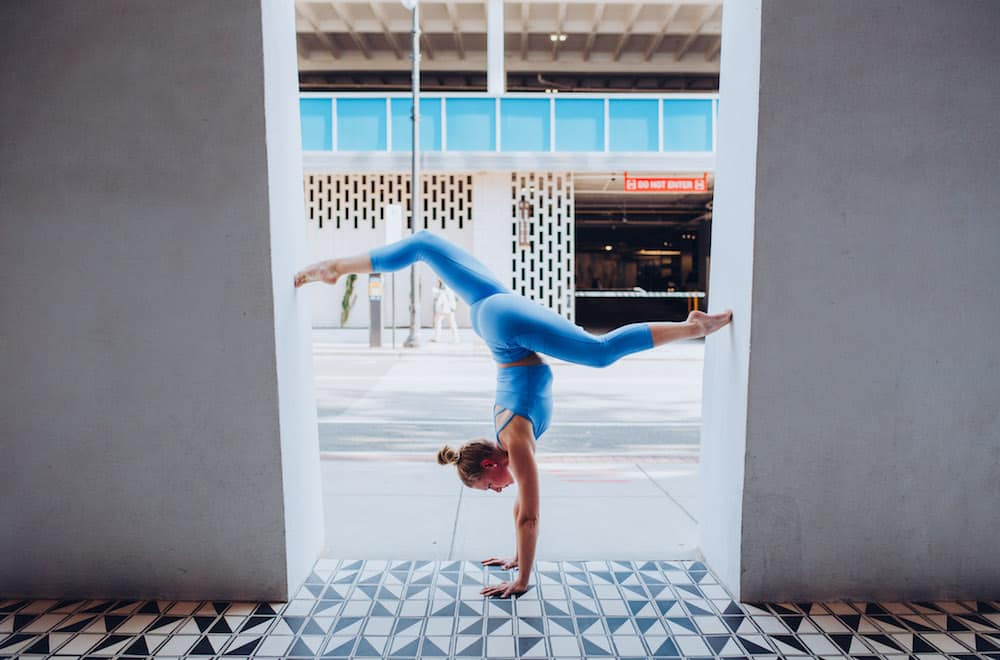 “Through my triathlon endeavors and yoga practices I’ve learned a lot by coming to my mat every day,” Ally says. “I’m happy to share what I’ve learned so others don’t have to spend years and years learning the same.”

Outside of fitness advice, Ally believes it’s important to share her authentic personality. “It would be misleading if I shared a glamorous life,” she says. “I try to be clear. I was recently unemployed and not getting responses from jobs that I applied to. I shared that process and how long it took to finally get an offer.”

Ally admits she feels a sense of obligation to her followers. “It’s like I was put in this influencer role without knowing the direction to take,” she says. “Sometimes I don’t feel like I show enough of my life or respond to major current events enough. Having 30,000 followers feels like a big responsibility sometimes.”

Even so, Ally finds connecting with people rewarding, and she’s had some surprising opportunities come her way through her Instagram presence. Inner Fire, an eco-friendly, female-owned yoga clothing company, reached out to Ally because of her following. They invited her to do a photo shoot at the Wanderlust Festival in Whistler, British Columbia. “I promoted their leggings that are made out of recycled water bottles. It was wonderful to be able to share something that I believe in,” Ally says.

Other companies have sent athletic wear and tools that Ally can use while teaching yoga privately and training for triathlons around Durham, where she lives with her fiance, Nick Noel.

“Instagram is a lot like people’s favorite TV shows,” says Desmond Scott, the owner of PRIME Athletic Training & Fitness Institute. “They expect to see certain shows that offer certain things. So I feel like I need to post consistently, as if I am a person’s TV show they keep coming back to.” And there are plenty who tune in – he has more than 18,600 followers on Instagram. 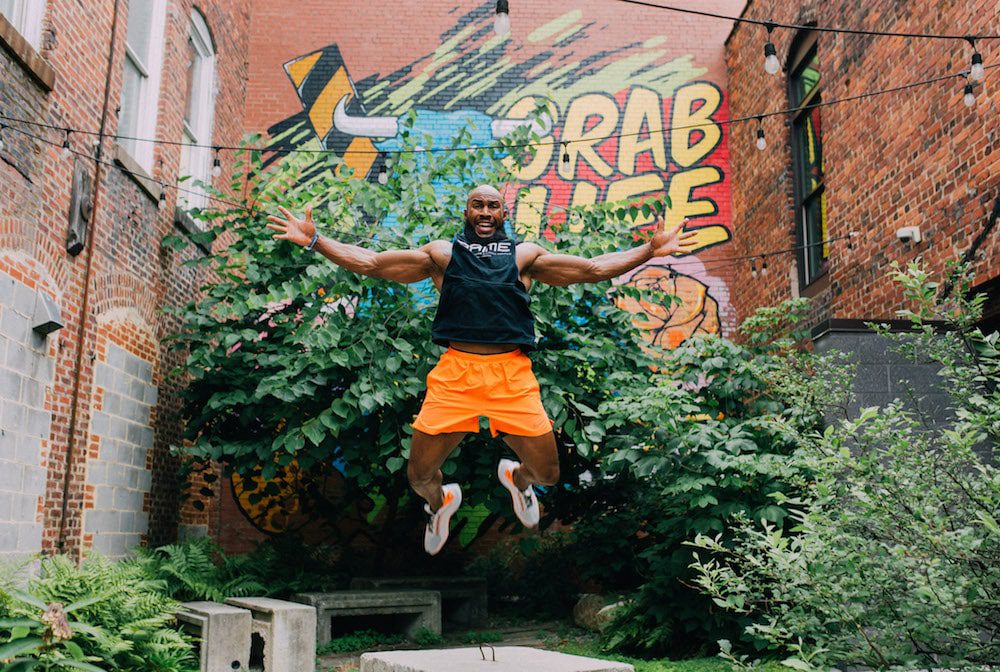 His follower count grew during his football career at Hillside High School and then again when he was both a running back and a wide receiver for Duke University. Desmond, who was on the team from 2009-2012, gained more than 1,000 yards rushing, receiving and in kick returns in 2010.

When he’d train for football, Desmond would often show off some daredevil moves, like doing pullups while hanging off a high bridge, and post them on Instagram, which drew attention on social media. But once he graduated with a double major in history and African American studies, and a minor in education, Desmond had to find a way to keep his followers interested as he moved on to the next phase. “Retelling my story was hard,” Desmond says. “A lot of my followers came from my football days, so I had to rebrand myself as a fitness influencer. It was like I was asking them to watch the same channel, but with a different show on.”

Through that process, he decided to stick to three core values for his account. “I show faith, family and fitness, which are what my gym is based on, too,” Desmond says. Many of his posts have inspirational messages like, “You can’t walk with purpose in the world if you’re tip-toeing. Walk with purpose even on rainy days!” 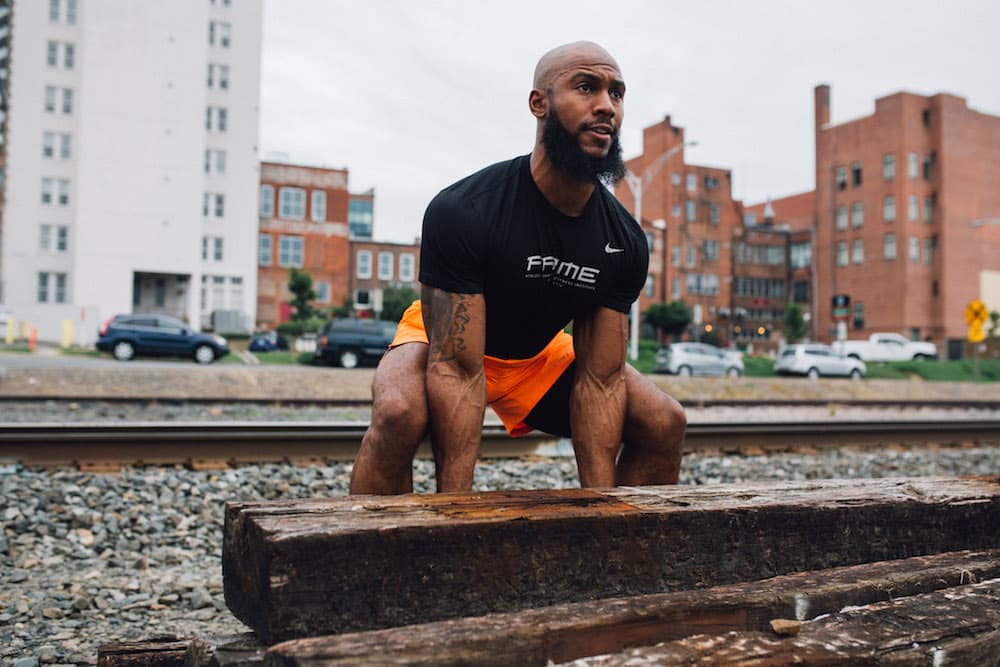 For Desmond, some of that motivation is found through lifting others up. “Being someone that influences others doesn’t necessarily mean something positive,” Desmond says. “I’m always making sure my message is one that encourages people to do better with their lives.”

“I started my Instagram account because I wanted to hold myself accountable,” says Ruth Penado, who began exercising seriously in April 2016 because she felt out of shape. 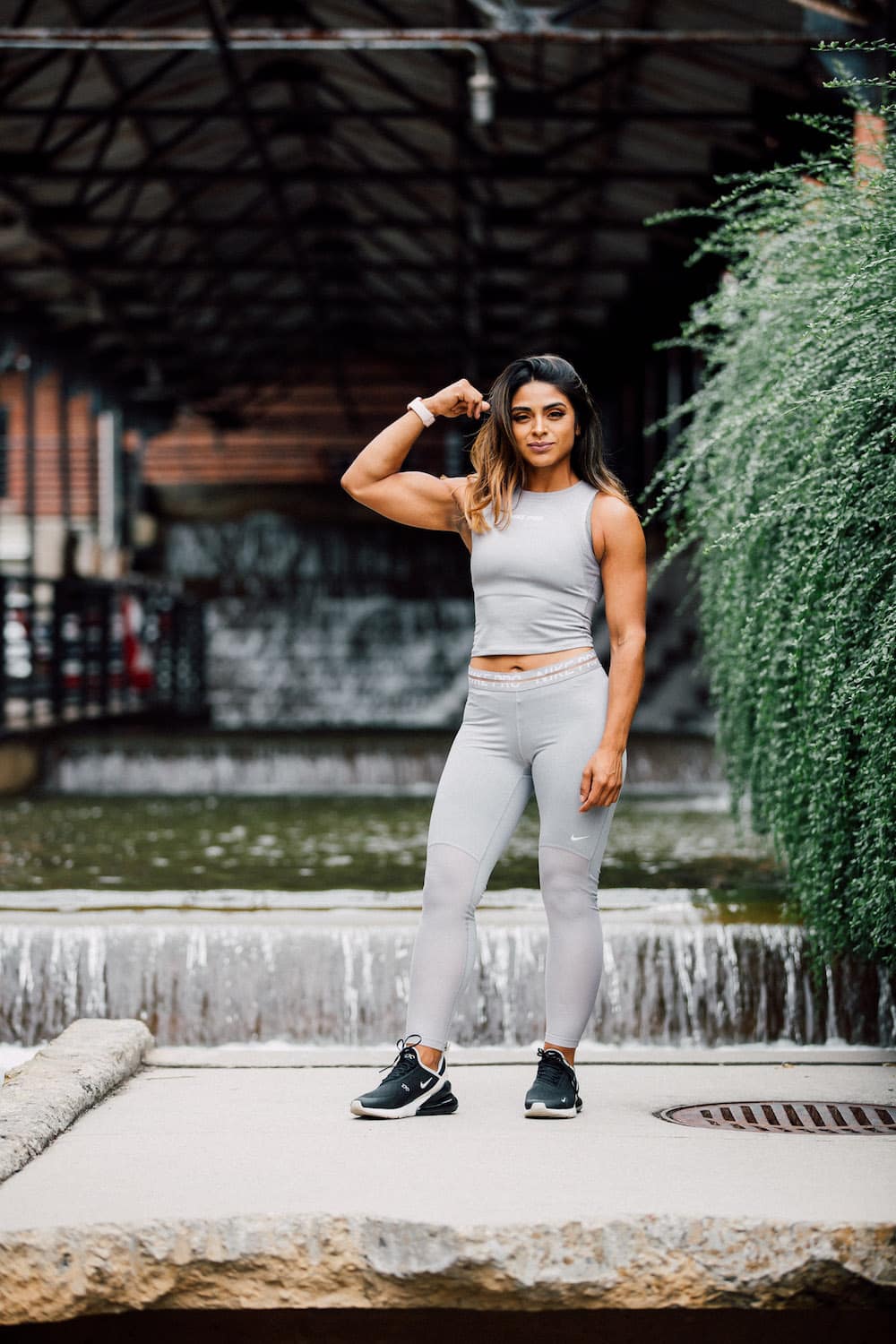 Three months into her journey, Ruth, who has lost some 80 pounds, posted a picture that showed how her body was changing, and a popular transformation account asked if they could share her story. “My account went from 300 to more than 10,000 in a month,” Ruth says. “And every time I’d get further into my transformation, an account like that would post my picture, and I’d get a lot of traffic that way.”

Now Ruth has nearly 70,000 followers, and she wakes up to more each day. She believes her transparency is what makes people feel so connected to her story. “I show as much of real life as I can,” Ruth says. “I live with my parents and work in retail. And when I have a moment of weakness, I make sure to share that, too. Changing to a healthy lifestyle is not a linear journey, and people need to know that.”

She appreciates the opportunity to inspire people, but Ruth does share that she struggles with the pressure of feeling the need to post. “I think you should share but not overshare. You’ve got to keep some of your life to yourself,” Ruth says. “But I get conflicted, and sometimes post even when I don’t want to. Sometimes I just want to be in the moment.”

Ruth also uses the Instagram stories feature to share moments of her day. In one slide, she’ll show a Fitbit that tracked eight miles, and then she’ll admit to eating 25 Oreo cookies in the next. This sharing of successes and personal truths transcends the virtual relationship with her fans, and many reach out to her asking for personal advice. 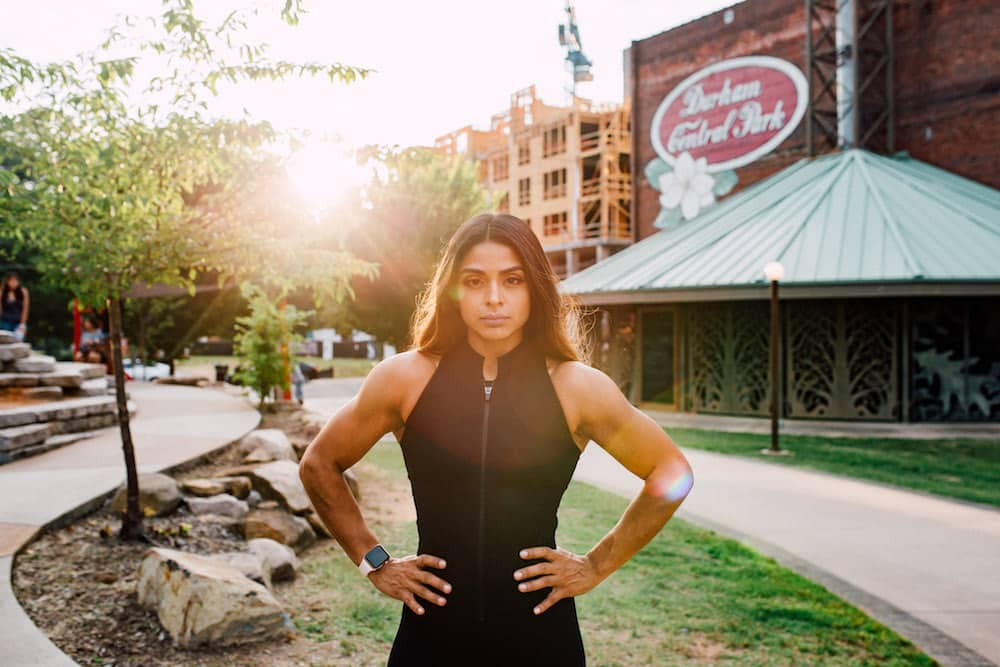 “I wish I could respond to every DM [direct message] and meet each of them in person,” Ruth says. “But the reality is that I still have to work and live my life. This is not a business I’m trying to profit from.”

Ruth says she is not in this for the money, but she has received some offers from companies wanting to capitalize on her large following. She recently became an ambassador for her favorite makeup brand, ColourPop.

She doesn’t take this influential power lightly. “I have high standards for myself,” she says, “and I try to keep those when I consider companies to partner with.”

Ruth was raised in Durham but moved to Charlotte in 2012. She came back to a rejuvenated Bull City in 2018 and found people viewed her birthplace in a completely different light. “My journey came full circle to where I live in Durham again, and I have a real sense of pride about living here now,” Ruth says. “I kind of feel like Durham has transformed like I have. I feel like people might look at my account and believe if Durham and Ruth can do it, anybody can.”

A Great Big Woolly Mammoth Thawing From the Ice