Take a Bite Out of the Bull City Vegan Challenge 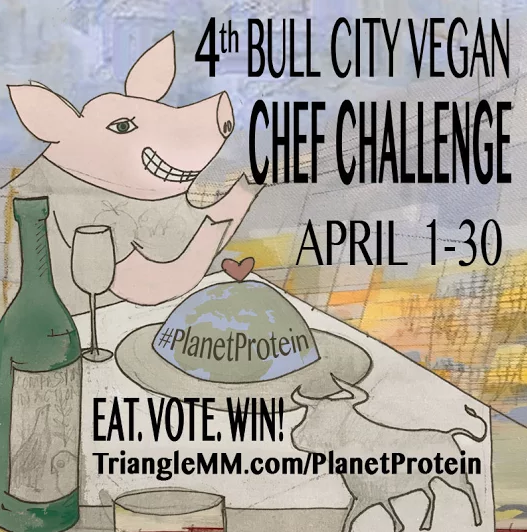 This April, the Bull City Vegan Challenge starts up again for the fourth year in a row – this time with a record-setting 15 restaurants participating. The challenge is all about bringing chefs and diners together to discover how tasty plant-based meals can be. For the entire month, chefs at these restaurants will offer a vegan meal on their menus, and diners will have the chance to vote on which dish is best.

Over the years, the popularity of this contest has grown with both diners and chefs. “After witnessing the success of previous events, we had several chefs approach us and request in advance to participate in future challenges,” says Kaitlin Grady, co-organizer of the challenge. “During the event, restaurants experience increased business, often selling out of their vegan dishes!”

Here are the contestants that have entered the ring to create a new and unique vegan dish:

“We applaud these restaurants for embracing this unique and fulfilling cuisine and any restaurants who continue to offer cutting-edge, plant-based meals to their customers. That is our hope,” says Eleni Vlachos, co-founder and long-time vegan.

What some people don’t understand about vegan food is that it doesn’t have to be bland. “There are so many interesting and palate-pleasing foods that just happen to be plant-based,” says fellow challenge co-organizer Leeanne Turtle. “We are excited for this event to bring together creative chefs and local vegan foodies.”

In addition to enjoying a flavorful meal, diners can also feel satisfied knowing that they’re supporting local organizations. “The Bull City Vegan Challenge is a terrific way to support our local businesses while making more room at the table for everyone,” Eleni says. ”We love engaging our community as part of this event and are happy to include community partners such as the Durham Convention and Visitors Bureau, SEEDS, the Farmers’ Market (where we’ll have a ‘protein cook-off’ by a local chef on April 9!) and the YMCA.”

The response to this challenge has been monumental, and many chefs have decided to add permanent vegan options to their menu as a result of the positive feedback from customers. “Diners who wouldn’t normally think about ordering a vegan option are intrigued by the challenge,” Leeanne says, “and the chefs really step up to the plate and offer mouth-watering options that get attention.”

This event also works in conjunction with Triangle Meatless Mondays, which is also spearheaded by Eleni and Leeanne. “The City of Durham has added a ceremonial item to their April 4 city council meeting agenda to proclaim the month of April as ‘Meatless Mondays Month’ to further spread awareness about the growing need for and demand of plant-based options in our community,” she says.

Go to their Facebook page to learn more or vote here after you’ve tried a few of the vegan dishes around town.