Steve Schewel greets each student by name as he welcomes them to his home. He has an apron tied around his waist and you can hear him calling out instructions from the kitchen in his Durham-by-way-of-Lynchburg-Virginia drawl. His workforce of students bustles around, placing the linen napkins carefully on the mismatched tables dragged into the living room. Soon they’ll be sitting around these tables on rickety wooden chairs, eating a meal lovingly prepared for them by their Duke professor of the last three months. They slow when they pass his bank of photographs, an entire wall filled with memories of his 66 years. One of those pictures, taken in 1983, shows a young Steve beaming up at the camera, holding the very first issue of the newspaper he spent 30 years of his adult life publishing. 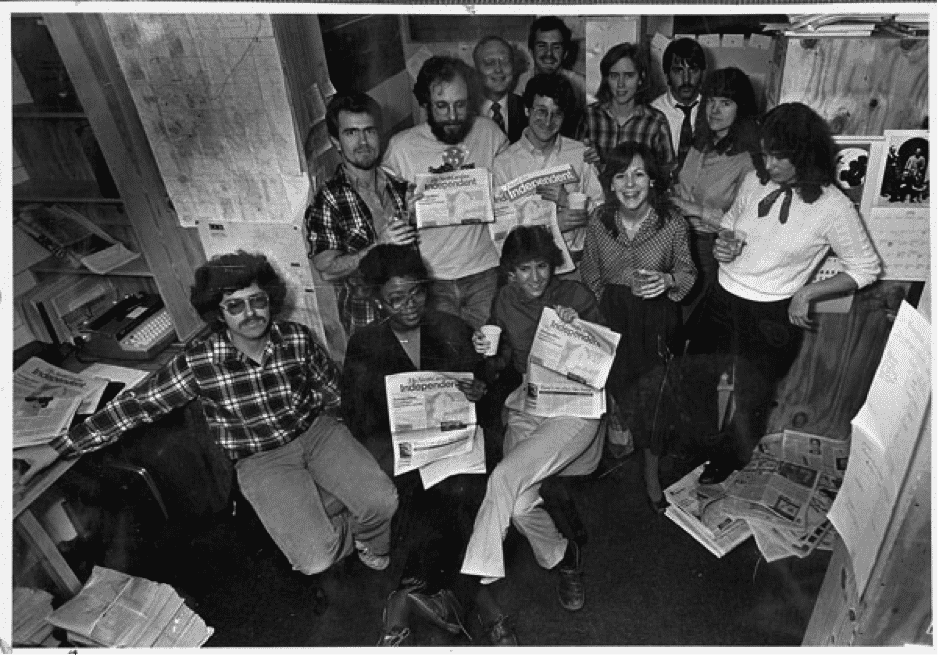 Steve started the newspaper – then the North Carolina Independent Weekly, now known state-wide as Indy Week – after spending eight days in the Wake County jail for protesting the construction of a nuclear power plant in New Hill, North Carolina. When he started the paper, he was a fiery young activist who could see the injustice running rampant in the world and was intent on stopping it. Whether that meant fighting the construction of Highway 147, staging sit-ins to protest nuclear power plants or spending nights in the county jail, his identity formed around direct-action activism. But what happens when those methods don’t work? What happens when the highway carves through a community and the power plant is built anyway? That’s when it becomes necessary for a fiery young activist to learn a few new tricks.

Steve is an activist at heart. He believes in the power of protest, of sit-ins, and of marches. He believes in taking action to fight the unjust. But he learned early on that sometimes activism isn’t enough. He learned the power of a deep knowledge of the issues, and of the ability to connect with people so he can share that knowledge meaningfully. It is this power he brings to the people of Durham as their mayor.

“He learned the power of journalism,” says Katherine Fulton, the first editor of the Independent. “He was at that point an activist, who advocated for direct change. Journalism is about having the facts, about telling the stories in a compelling way.” Steve spent the rest of his life learning, entrenching himself in the problems until he knew everything there was to know, and exactly how he could help. Rann Bar-On, an activist deeply involved in Durham politics, points out how this deep knowledge of the issues comes across in conversation. “When you ask him a question, he responds with policy,” Rann says. “It’s not ‘I want to make more affordable housing,’ it’s, ‘This is how I’m going to make more affordable housing.’”

The phrase “and this is how” is clearly one of Steve’s favorites. At a mayoral forum in September last year, it was sprinkled throughout nearly every one of his answers. The forum was held at Ponysaurus, which describes itself as a “brewery and taproom creating beers that are meant to be savored, appreciated, contemplated, philosophized, studied, nuzzled and mindfully guzzled.” Steve, clad in pressed khakis and a bow-tie, stood in front of the crowd as they appreciated, philosophized and nuzzled their beer. “In Durham, 50 percent of renters spend at least 30 percent of their income on housing,” he said, “and 25 percent spend 50 percent of their income on housing.”

There is a danger of this coming across as emotionless or robotic. You could see him standing up there with his white hair and his bow-tie, lecturing away as the professor that he is. But Steve makes it work for him, and he does it in a profoundly simple, powerful way. He remembers people’s names. He compliments them: “Thank you for that question, Mr. McCoy. By the way, I really like your beard. Now let me answer your question.” He could come across as a disconnected professor, if he didn’t connect with people so easily.

This connection with people is a core part of Steve Schewel. It drove his work at the Indy, as a professor and now in his political career. “Steve’s the one who kept the birthday calendar of everybody, he kept the heart of the Indy,” Katherine says. “He’s got a heart the size of Durham.” And Alma Blount, his co-teacher at Duke and friend of more than 40 years, remembers when she had a hip replacement: “Steve went out and cooked a full, multi-course meal and brought it over to my house on a tray.”

Jillian Johnson, who works with him as a fellow City Council member, sees this side of him in a different way, as his role in City Council is naturally more contentious. “He disagrees with me plenty,” she says, “and he’s not afraid to take a stand. But he will never do it in an alienating or unfriendly way. He disagrees compassionately.”

It’s this fostering of individual connection that creates the welcoming spaces that Steve is famous for. Though he makes it look effortless, it is done with intention. On the last day of class, his student Jess Garda tells me, he has all of his students go around and share one thing they appreciated about one another throughout the class, and he was sure to participate as well. “I remember, he told me that he thought I was soft on people, but hard on the issues,” Jess says. “I remember it because it was exactly what I was trying to be, and it meant so much to me that he had seen that.”

Steve creates this space with the dinners he serves his students at the close of each course. He spends all day cooking an elaborate Southern dinner, sure to include vegetarian and vegan options for full inclusivity. He invites his students to help in the preparation, both of the meal and of the space. They pull together all the tables he has at his disposal, they sit in a large circle in his living room, and they talk about anything other than class. He creates this space for connection.