Ask Leon Grodski de Barrera about Cocoa Cinnamon’s second location, opening this fall, and the coffee shop’s co-founder quickly shifts the focus. “Actually, opening is the least interesting thing that’s happening,” he says. “If you take any one person [involved] and look at their contribution, that is what’s fascinating.” It’s the same approach Leon and his wife and co-founder, Areli Barrera de Grodski, have had since day one. “The core of what Cocoa Cinnamon is about is taking the habitual and breathing some life back into it again,” she says.

True to form, Cocoa Cinnamon’s Old West Durham location will be a completely different but equally intentional space, inspired by the community it will serve. The couple have worked closely with an eclectic team of Durhamites including artist David Solow, woodworker Maryah Smith-Overman, artist Heather Gordon and restoration specialist Steve Baskin to plan the new shop. It will share a building with architect Coby Linton, who has also had an integral role in the design.

Get ready for an atrium entrance with a live tree growing in the middle and a maximized use of space inspired by places near and far. “We call this our Toast seating,” Leon says, gesturing along one wall and referring to Kelli and Billy Cotter’s eatery, “and this will be our Bull City Burger communal seating.” Then there’s a front alcove based on Middle Eastern teahouses and artistic elements inspired by Frida Kahlo’s house.

What will remain the same is the coffee, the chocolate and many of the faces, all of which helped Cocoa Cinnamon raise much of the capital for this expansion. “You need money as a tool, sure, but it’s not the point,” Leon says of partially crowdfunding both locations. “Crowdfunding … becomes this catalyst for opening yourself up to the community that then finances you. … If we’re happy with just enough, with money only as a tool, that means as our business profits more, we have more capacity to share that and bring the standard of living up for our crew, who then spend money in our local community.” A cup of coffee for Durham? Eye opening.[/vc_column_text][/vc_column][vc_column width=”1/3″][vc_column_text] 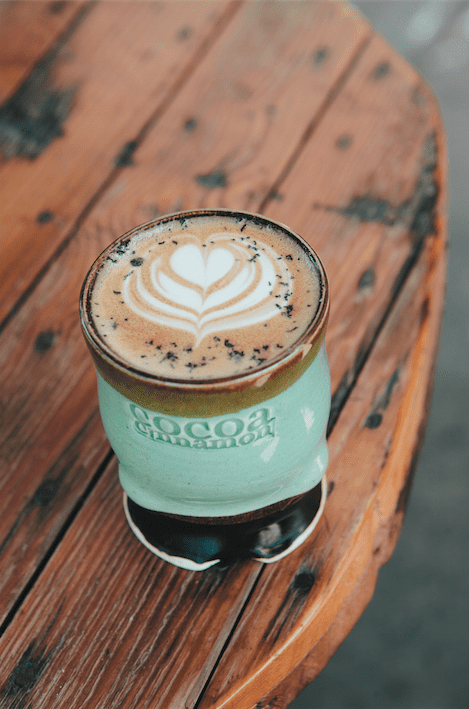 Cocoa Cinnamon’s menu is notoriously unique – and also thoughtful. “The Dr. Durham is our approach to being true to our place,” Leon says. “It’s become very popular.”

Considering Dr. Bartlett Leonidas Snipes Durham, a medical doctor who donated a tract of land influential in the beginning of our city, led to thinking about the role of colas in Southern culture. There’s Pepsi, Cheerwine and Coca Cola, all created in the Southeast and “all health tonics originally,” Leon says. “So we made a drink named after Dr. Durham and playing off of a health tonic.”

Order a Dr. Durham when you’re in the mood for, essentially, an intriguingly complex vanilla latte. Frothed milk and espresso are sweetened with homemade vanilla bean syrup (“That’s not really a health tonic thing, that’s more of a taste thing,” Leon says) and then topped with maca root powder, ginger root and – the best part – black lava salt from Hawaii. “It’s odd; it’s not the most normal drink in the world. It’s our fun version of riffing off one of those colas.”[/vc_column_text][/vc_column][/vc_row]

Diggin in the Crates