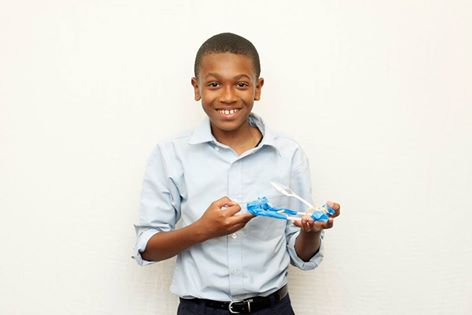 On July 13, 12-year-old Glenn Green started his first day as an Art Director “Mtern” – the youngest ever – at McKinney, an advertising agency with offices in Durham and New York.

Earlier in the summer, the Emily K. Center posted an article Glenn wrote, entitled “My Future,” on their Facebook page. In this essay, Glenn discussed his passion for art direction and the skills he hopes to acquire in the future.

“You can go as far as you want in terms of what you can think of,” Glenn says. “Some jobs don’t let you go out of a certain box, but with art direction, that box doesn’t really exist.”

Moved by his determination, a teacher passed Glenn’s post along to those at McKinney, who happily welcomed the opportunity to have Glenn in their office.

“His essay personified his passion and focus, as well as articulated a point of view that we do day-to-day,” says Claudine Dusablon, McKinney’s associate director of talent management. “We could tell he could hold his own.”

Glenn claims he was both nervous and excited on his first day in the new environment.

“I didn’t know what to say and I was waiting for someone to tell me what to do, but now I know how they roll here,” Glenn says. “Everybody is just so nice and they are willing to give me a hand anytime.”

As an Mtern, Glenn’s main task is to create an award for the band whose performance best fits the 2015 Triangle Corporate Battle of the Bands theme, “Rock and Roll Fairytale.”

The Battle of the Bands will take place September 19 at the American Tobacco Campus. This is McKinney’s ninth year hosting the exciting event, which has raised just shy of $1 million thus far for local charities.

Book Harvest, a nonprofit organization that provides books to Triangle-area children, will receive the proceeds of this year’s Battle.

Glenn is grateful toward McKinney for offering him this opportunity, and hopes other students like him will start to chase their dreams early on as well.

“I would tell [students] to get involved in a good program like the Emily K. Center because they can reach out to other places,” he says. “To have that support is very beneficial.”