In April, a man in a sun hat walked up to the old wood counter at Stone Brothers & Byrd carrying marigolds, impatiens and trays of seed starts. He talked with cashier Fuller Sasser about the recent cold snap. Then Sasser examined the man’s gift certificate, which was less than the cost of the items, and waved away a $20 bill he’d offered to make up the difference.

“That’s close enough, we can call it even on that,” Sasser said. “Keep that in your pocket and spend the rest of it next time.”

For Stone Brothers, which started as a farm supply store 109 years ago, the kind of personal attention and classic feel that encourages customers to return “next time” is a key part of its business plan.

“People come in and are like, ‘Wow, this is old-time. Nothing’s changed here,’” said Sasser, who would come into the store as a child with his grandfather. The employees, all five of them, still scoop seeds from behind the counter, and you’ll still find country hams, canning supplies and 1950s songs playing over the loudspeakers. But plenty has “evolved over the decades,” too, Sasser said.

They sell Meyer lemon trees, kumquat trees and cactuses to the condo residents who recently arrived near their Washington Street location downtown. About a decade ago, the company added online sales to supplement retail, and they also have a landscaping division, Byrd’s the Word. Last year, they converted a room into a potting bar so that customers could fill seed trays with soil or transfer a houseplant to a planter before bringing it home.

“That’s what’s kept us in business for 109 years is being able to change,” said the owner, George Davis, who took over in 1976 from the original owners.

“This influx of new folks in Durham is creating changes in inventory and more of it.”

Durham has several family-owned garden centers that have lasted over the decades, even amid the arrival of big box stores and the 2008 financial crisis that hammered garden centers nationwide. But as Durham grew and evolved, these centers prospered, their owners say, because of an expert knowledge of their products and by evolving along with their customers.

Barnes Supply Company on Ninth Street, founded in 1946 by Lee Barnes, also started as a feed and seed store. Gary and Patricia George have owned the store since 1991, and their sons, Jason and Jonathan, handle the day-to-day operations. They will eventually take over.

Jason George said he remembers when the store focused on hardware and lawn and garden supplies. His father watched Home Depot arrive more than a decade ago, and within the year knew the company would have to change. Barnes no longer sells hardware, but the lawn and garden section makes up about 30% of sales.

The store has 12 employees and continues to offer bulk seed sold out of mason jars, vegetables, soils and insecticides, herbs and hanging baskets. But because lawn and garden sales are seasonal, the Georges shifted to specializing in pet nutrition and agricultural feed.

Barnes now sees customers in pet-loving Durham return every week with their dogs, pot-bellied pigs and, once, even a monkey in tow. (Barnes provides monkey food for the Duke Lemur Center and the Museum of Life and Science, as well as to a regular monkey customer. They’ve even ordered zebra food by request.) Other customers drive from outside the city to pick up feed for horses, goats, llamas and emus. Veterinarians occasionally send clients in for a lesson on pet nutrition.

“We don’t really look at your pet as a pet. It’s more or less a family member,” George said.

The 4,000-square-foot store has a room dedicated to wild birdseed and feeders, a leading hobby for older customers. They offer a selection of succulents and houseplants for the younger apartment residents and students living nearby. Barnes also transformed an outbuilding into a chicken shed after urban chickens began to pop up in yards across Durham. Hundreds of peeping, multi-colored chicks arrived there in early April, and the first group of customers who wanted to hold them and “aww” showed up within the hour.

“You wouldn’t believe the number of chickens that are in this town,” George said, adding that they often can sell 10,000 pounds of chicken feed in a week.

Other than the competition from big box stores, George said, limited parking is their greatest drag on growth. George strives to grow 15% per year, he said, and believes their most profitable investment was adding central heat and air conditioning in summer 2018. This improvement allowed customers to shop at leisure without breaking a sweat. Barnes also did an interior remodel a few years ago, replacing wood paneling and upgrading signs.

“A well-lit and comfortable environment, in my opinion, will make you want to splurge more,” he said.

The development of condos, apartment complexes and housing can boost the sales for nearby garden centers. According to Durham’s Planning Commission, the county’s population has grown 15% in eight years. About 20 people move to the city a day.

Stone Brothers says they’ve come to recognize the residents from a new condo complex nearby, and Barnes said business increased when a pet-friendly apartment building opened on Ninth Street.

At Kiefer Landscaping and Nursery, Janet Kiefer sometimes knows when a family is stopping by long before they arrive. Recently, a couple from Miami called looking to book a landscaping job at their new home in June. Janet’s husband, Mark Kiefer, founded the landscaping company in 1984 and added the nursery for retail sales and to supply landscaping jobs in 1995. Though their 12-acre property on Alston Avenue features specimen shrubs and trees, perennials, pots, a garden center and a gift shop, landscaping still makes up about 70% of the business. Kiefer has 21 full-time employees, five of whom work in the nursery.

Kiefer’s retail manager, Shawn Priggel, said he has seen a growing interest in landscaping for small lots. The nursery has expanded its dwarf shrubs and trees, and customers often ask for help creating a hedge or line of trees for privacy. Others drive in looking for a specific plant they saw online. While meandering around a koi pond and babbling waterfall, customers can pick up unusual specimen conifers from Oregon, reblooming irises or “unique” yellow rhododendrons. Mark Kiefer continues to expand the species grown on the property, which make up about 80% of their offerings. Most years he takes on projects, and is building a pottery barn on the property.

“My husband just loves to do something different all the time,” Janet said.

Housing markets and air conditioning, however, have nothing on the sales impact of a sunny day.

“Weather will drive everything in this business,” said Kevin Whitten, who along with his wife, Melanie Gunter Whitten, owns Gunters Greenhouse, a wholesale and retail nursery on Angier Avenue. The couple have a third employee on site, he said, and his mother and Melanie’s mother pitch in.

Hurricane Florence and increased rain levels overall last year caused sales to drop a bit, Whitten said. This is on top of the standard 60% drop-off in the fall. But spring is huge.  Whitten and family work in seven greenhouses on the 4-acre property, and supply most of the region’s garden centers, including Barnes, Southern States and Ace Hardware. They grow pretty much everything they sell, and about 70% of sales are wholesale.

The Whittens took over Gunters in 2002 after the death of founder Burt Gunter, Melanie’s father. Burt began in 1982 selling vegetables, and at some point added flowers. Melanie and Kevin later added houseplants and shrubs to the inventory, and about six years ago, they were one of the first nurseries in the area to begin growing succulents. They now grow 150 varieties. Kevin says he tries to continue adding new plants, about 100 this year, because it keeps the work interesting.

This spring he sees potential in the Gerbera daisy “Garvinea,” which grows twice as fast and twice as big as other Gerbera daisies, and “Constellation” petunias, inky purple, white-speckled flowers that nearly sold out the first weekend.

“I like the odd stuff,” he said, “the stuff no one else wants to grow.”

Though a new housing development off Leesville Road increased some business, he said garden centers can’t rely on a booming housing market because it doesn’t always translate into new gardeners. Rather, it is vital to adapt to the changing tastes of existing gardners. For 10 years, he said, you could hardly give away a houseplant. Now people younger than 30 regularly seek out houseplants and succulents.

“If you stay in business, you have to change,” he said. 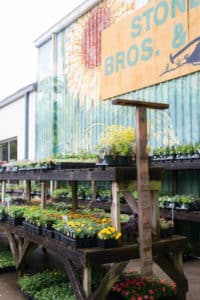 Green Gardening As a Growing Trend

Environmental concerns are common among Durham patrons, the owners say, playing an outsized role in how they shop. The overuse of pesticides nationwide has been linked to illnesses – and even a deadly drug-resistant fungus in the Northeast – and pet-and-child-safe pest control products have sparked a mini-industry.

The garden centers have noticed and adapted.

Kiefer, Priggel said, does not use conventional pesticides and doesn’t mind explaining a few holes in the leaves to customers. Occasionally, he said, they use insecticidal soap or neem oil in the greenhouses.

Customers have also shown an interest in growing native trees and plants that aren’t invasive and feed local wildlife, like tupelos, persimmons and even a “Jefferson” elm grown from a cutting of a Dutch-elm-disease-resistant tree on the National Mall in Washington, D.C.

Whitten said that though they can’t avoid pesticides entirely, they try to use as little as possible. This spring, Gunters began employing predatory mites in the greenhouses to control whiteflies, spider mites and aphids, in hopes they can reduce the use of sprays.

“It’s getting to the point now chemicals just don’t work because it’s been so overused,” he said.

And, of course, the organic boom is in full effect.

Barnes has standard chemical pesticides, but also offers safer options like weed killers made of corn starch. Stone Brothers has sold organic insecticides for a number of years, and offers Tanglefoot, a sticky goo that helps control inchworm populations and is popular each fall among Durham residents with large hardwood trees.

Above all, whether it’s because of sunny days or new housing or the organic revolution, demand is strong. Even after decades, customers go to their local garden centers to find what they’re looking for.

“The bottom line,” Sasser said, is that “we listen to our customers.”